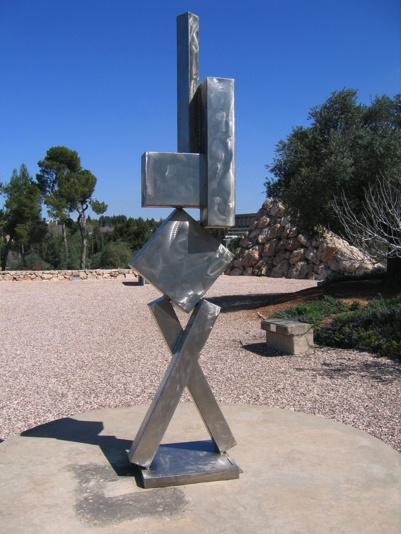 Sculptor David Smith is born. He often said, “I belong with the painters”. It’s true: he built his sculptures the way you’d make a painting, or a collage–welding pieces together on the floor, first one shape then the next–rather than more traditional sculpting techniques like casting or carving.

He changed what sculpture is capable of, for example, sculpting a page of writing (The Letter), landscapes (Hudson River Landscape) and still lives (Head as Still Life), proving his point that the sculptor’s “conception is as free as a that of the painter. His wealth of response is as great as his draftsmanship.”

Summer jobs at a car factory provided him with the industrial skills, like welding and burnishing, he’d later use in his sculptural collages. In fact, the factory environment also dictated his working technique, once he had the financial means to realize it: he stocked large quantities of materials, saying that it freed his creativity. His work also got accordingly bigger.

I found this really interesting: although many of his later works are numbered (Zig IV, Steel Circles I, II, and III), he didn’t actually work in series. He simultaneously worked on all sorts of projects and grouped and titled them afterwards. The impressive exception to this working method is the Voltri series, 26 sculptures made in 30 days (!) in Italy during June 1962, when Smith was invited to make work for a festival in Spoleto.

He made 300 – 400 drawings a year in addition to his 3D work. He was well-respected while he was alive, especially by other artists like the Abstract Expressionists and a younger generation of painters, like Robert Motherwell and Helen Frankenthaler, though he sold very few works during his lifetime.