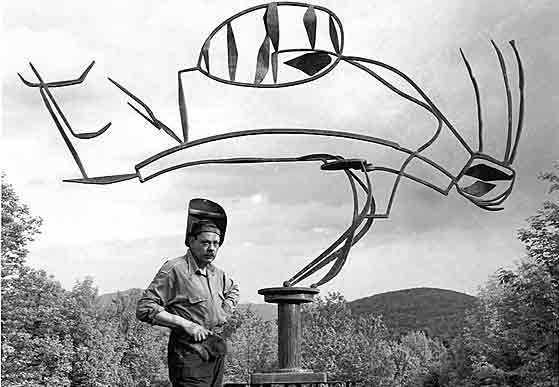 David Smith with his sculpture Australia, 1951

David Smith dies in a car accident in Vermont.

Throughout his career, he expands what it means to sculpt in metal. His experience in industrial welding, from a summer job in a car factory, to welding locomotives and tanks during World War II, brings his perspective outside of the box. Instead of the tradition of bronze casting, Smith creates pieces by welding metal parts together. For this reason, he always feels and says that he “belongs with the painters” because his technique is more like creating a painting, putting lines and shapes together with a torch instead of a brush, and each sculpture is one-of-a-kind, like a painting (and unlike a bronze cast, which can be poured more than once and editioned).

That being said, his very first sculpture is made from coral, interestingly enough.

His industrial experience also causes him to run his studio like a factory, stocking it with large amounts of raw material.

Working and thinking like a painter, Smith makes sculptures of subjects that had never before been created sculpturally: landscapes, still lives, and even a page of writing.

My favorite fact about Smith, besides the coral, is that he once created 27 pieces in 30 days while working in Italy. This is incredible by any measure, but especially so considering that most of Smith’s work was large-scale.