365 Days of Art: November 16 – Frida Writes a Letter from US, AIDS Exhibition Opens (Under Duress) After Grant Partially Restored 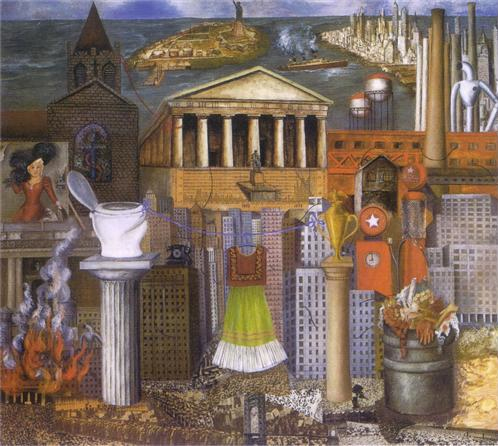 Frida writes a letter to her friend Isabel Campos that she is “dreaming about my return to Mexico”:

New York is very pretty and I feel better here than in Detroit, but in spite of this I am longing for Mexico…Yesterday we had snow for the first time…there will be nothing to do but dress in woolen underwear and put up with snow. I do not feel the cold so much because of my famous long skirts but sometimes I feel a cold draft that could not even be prevented by twenty skirts. I still run around like crazy and I am getting used to these old clothes. Meanwhile some of the gringa-women are imitating me and trying to dress a la Mexicana but the poor souls only look like cabbages and to tell you the naked truth they look absolutely impossible. That doesn’t mean that I look good in them either but still I get by (don’t laugh).” 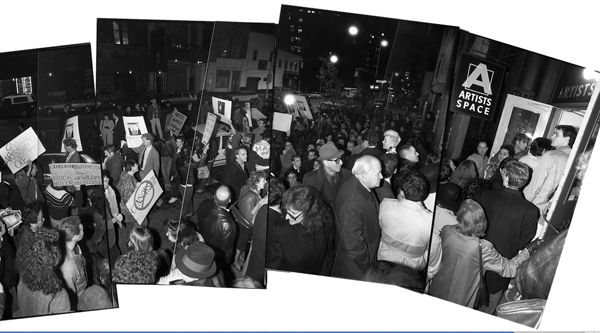 The scene outside Artists Space gallery, including protesters, at the opening of Witnesses: Against Our Vanishing, November 16, 1989.

An exhibition about AIDS, organized by Nan Goldin, the grant for which was revoked by the NEA, opens in NYC with the grant partially restored.

This is not seen as a victory, however. The grant money is revoked based on content in the catalogue, and the partially restored grant specifically will not fund the catalogue. This decision, leaves artists and others, like composer Leonard Bernstein who rejects a medal from the White House over this incident, feeling that the NEA is playing dirty.

To understand a little more of the emotion and feeling of betrayal surrounding this incident, consider Goldin’s personal statement about the show, called Witnesses: Against Our Vanishing:

Over the past year four more of my most beloved friends have died of AIDS. Two were artists I had selected for this exhibit. One of the writers for this catalogue has become too sick to write. And so the tone of the exhibition has become less theoretical and more personal, from a show about AIDS to an issue to more of a collective memorial.”

The offending part of the catalogue, written by David Wojnarowicz, who himself will later die of AIDS, criticizes members of Congress and a Catholic cardinal whose stances against safe sex education are widely seen as jeopardizing more lives. The NEA’s reaction to this essay, along with their cancellation of Robert Mapplethorpe’s entire show just six months earlier, is seen as a disturbing trend that dirties the waters of the art world with right-wing politics and specifically punishes those who speak out about the AIDS epidemic.

Wojnarowicz feels so strongly about the gallery director’s decision to accept the partial grant that he does not attend the opening, saying:

I don’t feel that civil or constitutional rights are a worthy trade for money.”

Interestingly, Wojnarowicz, who will die in less than two years of AIDS, angers certain politicians again in 2010 over a different art exhibition. A different generation of right-wing politicians, outraged over his work about AIDS, threaten to remove government money from the Smithsonian Institution and directly cause the removal of Wojnarowicz’s film from the exhibition Hide/Seek.