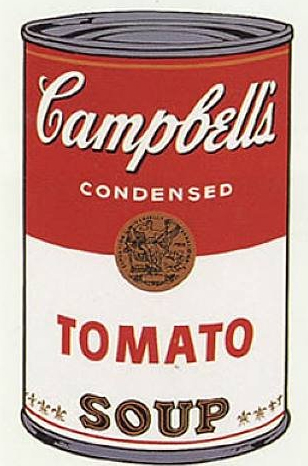 Andy Warhol, in frustration at not having found his muse yet, begs his friend Muriel Latow for ideas. One day she visits him at his house at 1342 Lexington Ave in NYC, and he implores her to “Just tell me what to paint”. She replies that she’ll tell him for $50, but that he has to write the check before she’ll give him the idea.

Now the memories differ slightly. According to Latow, with check in hand, she tells him to imagine the most common thing in the world, like a Cambell’s soup can…in fact, why not a Campbell’s soup can? Someone else who is there says that Latow asks Andy to think about his likes and dislikes. He replies that he absolutely hates grocery shopping for his mother, who lives with him, and that he especially hates Campbell’s soup, which she makes every day for lunch. Accordingly, Latow tells him to buy one of every variety of soup, and paint them all.

And art history is born. That’s the best $50 anyone ever spent.