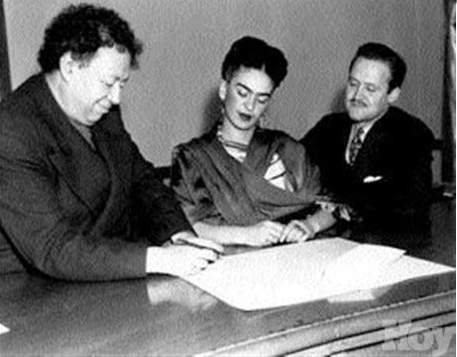 Frida and Diego sign the register in San Francisco, December 8, 1940.

Frida writes to her pal and confidante, Dr. Eloesser:

I have suffered so much in three months that it is going to be difficult for me to feel completely well soon but I have done everything I can to forget what happened between Diego and me [referring to his affair with her sister Cristina] and to live again as before”.

George Dyer, Francis Bacon’s longtime love, commits suicide, just before the opening of Bacon’s retrospective at Paris’ Grand Palais. His death, by a deliberate overdose of pills in their hotel room, inspires Bacon to paint Triptych, May–June 1973, a portrait of Dyer’s last moments.