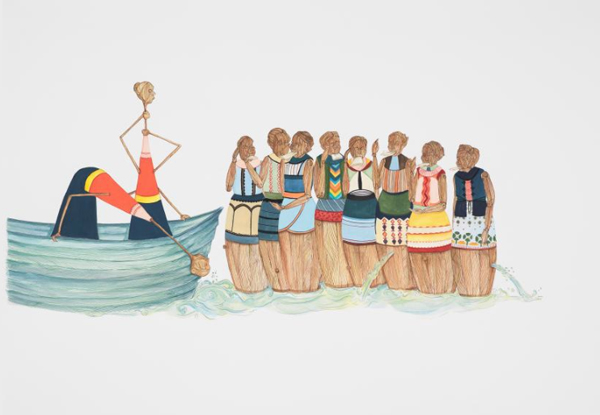 A solo show of new works by Amy Cutler, one of my favorite artists, opens at Galleri Magnus Karlsson in Stockholm. Her very mysterious, yet funny, paintings often feature groups of women engaged in group activities that simultaneously bring them together, yet show the rifts and competition in their dynamic. There is a sort of fairy-tale jousting metaphor that plays out more than once, whether it’s women riding ponies and fighting with umbrellas or going at it on top of dining room tables, with dining chairs strapped to their heads, antler-style.

There’s a sort of anachronistic timelessness that reminds me of “The Lottery” by Shirley Jackson, and also the film Dogville by Lars von Trier, both of which have the same undercurrent of ruthlessness and group-think. Strange, powerful stuff. Something feels universal but very off in her work, like suddenly realizing in middle school that not everyone is going to be friends anymore, and that things just got a little dangerous.

I met the artist at an opening in Providence, and she herself is a delight.