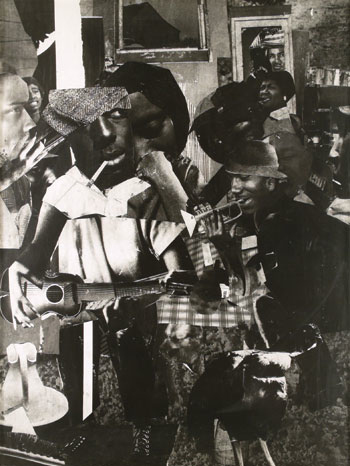 Romare Bearden is born. He’s one of my favorite artists for the way he creates collages with rearranged cutouts from magazine photos. He begins his art career as an abstract painter but finds that his storytelling peters out in this medium. He casts around for a new way of communicating and hits upon images from glossy magazine photos, which he cuts out, dismantles into parts, rearranges, and glues down with thick layers of adhesive.

This new approach and turn to the figure coincide roughly with the Civil Rights Movement, and his main subject is everyday life in Harlem. In his photomontages, African Americans walk down the street, offer and accept cigarettes, care for children, talk to the neighbors on the next stoop, and play guitar. It’s a vibrant world, full of activity and larger-than-life characters. These characters are made from multiple sources: an original magazine photo might become three or more people in one of Bearden’s collages, with the original donating a hat to one character, a nose to another, and one eye each to two more folks.

His life is stuffed as full as his collages: he’s a minor league baseball player, a social worker, an artist, a poet, a civil rights activist, and a musician.