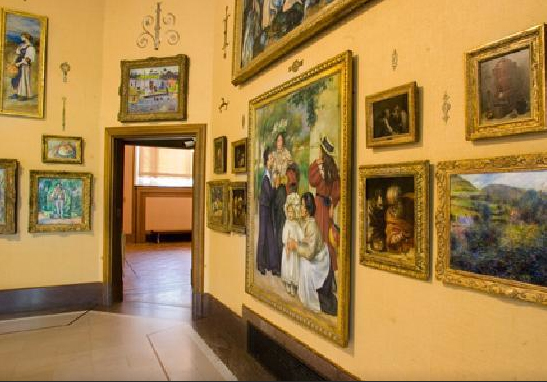 The original Barnes Foundation with its eclectic hanging and groupings of works.

The Barnes Foundation, possibly the best collection of Post-Impressionist works in the world, announces a petition to move from Merion, Pennsylvania to Philadelphia.

The need for a petition, and the reason this request rocks the art world so thoroughly, is because collector Albert C. Barnes has left his collection of personal favorites in a trust, the terms of which specifically state that the works cannot tour, and that the collection cannot be moved.

The Barnes Foundation has lived in suburban Philadelphia since 1922. Interestingly, Barnes makes his fortune by developing an anti-gonorrhea drug in the days before antibiotics. He deliberately sees the Foundation as more of a school than a museum, and operates it accordingly. For example, the Foundation is open to the public only two days per week to allow for student study; it does not loan work out of the collection, nor does it exhibit touring exhibitions from other institutions. The groupings of paintings, called “wall ensembles” are placed to allow for comparison between different time periods and cultures and are not to be rearranged. For this attention to the study of art above other considerations, Matisse is said to have called the school the only sane place in America to view art. These and other requirements are kept up by Mr. Barnes for many years and written into a trust overseen by Lincoln University, to be carried out in perpetuity.

For oft-cited financial reasons, and a less-cited desire to place Barnes’ treasures where tourists can more easily access them, some prefer to move to a prime Philadelphia location. The petition is polemicizing; no one is on the fence.

The Foundation appeals to the Montgomery County Orphans’ Court, which oversees the Foundations operations. The Court grants exceptions for a tour, violating the trust, then approves the move, again violating terms of the trust. The Foundation moves in 2012.

All of this is chronicled in the movie The Art of the Steal.

I’m not sure that Albert C. would have approved of the move, even if it means more people will now see the collection. Regardless, here’s a story I really enjoy about him. He is known to be a passionate art lover, who wears his enthusiasm on his sleeve. He’s also incredibly knowledgeable and becomes an educator as well as a collector. A well-known, unnamed art dealer who used to study with him, recalls being at the Foundation discussing art with the class. To illustrate a point, Albert tells him to go into the next room, take a Renoir off the wall and bring it back so that the class can see it up close. The dealer recalls how star struck he was to hold a Renoir and to so casually pull it off the wall, as if it were nothing. He remembers his hands shaking as he tried not to drop the painting. More than that, he remembers Albert C. brusquely making fun of him in front of the whole class for his nervousness.