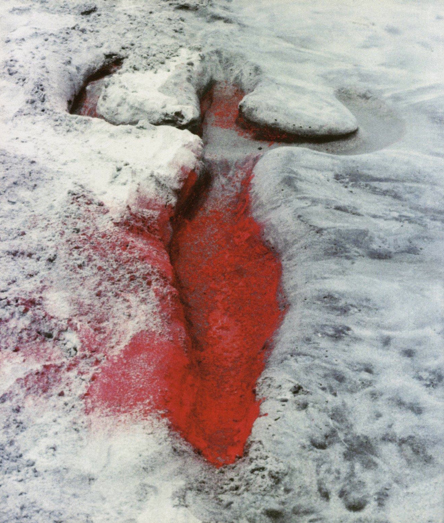 Ana Mendieta dies at age 32, after falling from her 34th floor apartment in New York’s Greenwich Village; her husband, sculptor Carl Andre is charged with her murder. Though there are no eyewitnesses, the doorman and neighbors overhear a violent, drunken argument between the newlyweds, as well as a woman repeatedly screaming “No” just prior to Mendieta’s fall.

In Andre’s emergency call, he says Mendieta has “somehow gone out the window” of their Greenwich Village high-rise. Andre’s statements to police differ from this emergency call, and he has scratches on his face and arms, so he’s arrested. He claims he has no memory of the evening.

The incident is a divisive one in the art world, with people taking one side or the other.

Mendieta’s friends, male and female, don’t believe Andre’s defense that there may have been an unremembered accident, or that Ana has committed suicide. They remember her as “up”, ambitiously looking forward to a new body of work, and talking about giving up drinking and smoking so that she could live long enough to reap some rewards from a long art career. They resent Andre’s lawyers for attempting to use her artwork to support what they feel is a ridiculous notion of suicide. They don’t believe an accident theory, either, saying she never would have gone near the windows, let alone in her underwear, as she suffers from an intense fear of heights. The general consensus among her friends is that Andre, her husband of eight months, has pushed or thrown her out of the window during an argument.

Andre requests a trial by judge, rather than jury, avoiding cross-examination; he is acquitted of murder three years after Mendieta’s death.

Mendieta’s work, which she describes as “earth-body” art, usually puts her in the same school as environmental artist Robert Smithson, but she deals with issues of gender as well as land. Some of her best-known work includes silhouettes of her body created with natural elements like mud, rocks, flowers, and leaves. She also works with her own blood, suggesting magical, feminist, sexual, as well as violent properties, in keeping with the feminist tradition of the 1970s. Many of her materials suggest her background in Cuba and Mexico, an earthy connection to land, and a desire to ground herself to it.