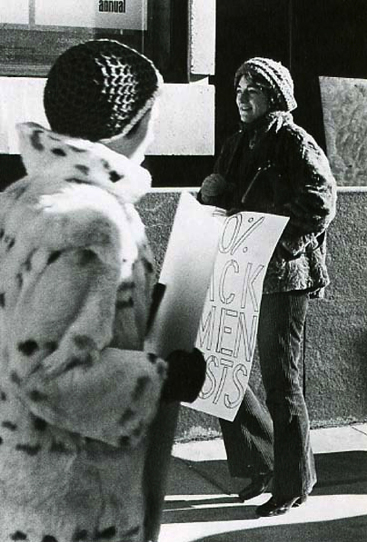 Artists with police whistles protest at the opening of the Whitney Annual because of the few women the Whitney historically exhibits. Faith Ringgold recalls:

In the fall of 1970 Poppy Johnson, Lucy Lippard and I, formed an ad hock [sic] women’s group to protest the small percentage of women in all past Whitney Annuals…Our goal for the 1970 annual was 50% women…The Whitney Museum became the focus of our attention. We went there often to deposit eggs. Unsuspecting male curatorial staff would pick up the eggs and experience the shock of having raw egg slide down the pants of their fine tailor–made suits. Sanitary napkins followed… Generally, everywhere the staff went they found loud and clear messages that women artists were on the Whitney’s “case.” The Whitney Annual that year was to be a sculpture show… Because of the Whitney’s well-known preference for abstract art, …Betye Saar and Barbara Chase-Riboud…were the ones I unconditionally demanded to be in the show. Saar and Chase-Riboud became the first black women ever to be exhibited at the Whitney Museum of American Art. The total percentage of women in the Whitney annual in 1970 was twenty-three percent as opposed to the previous year’s average of five to ten percent. This was better than ten percent, but it still wasn’t fifty. We decided to demonstrate during the opening to make that point… At a pre-determined time, Lucy Lippard and I began to blow our whistles… We continued to blow. The people gathered around us and we formed a big circle on the floor. Then we got up and walked around chanting, “Fifty percent women, fifty percent women.” Throughout the show we demonstrated every weekend, blowing our police whistles and singing off key…”. 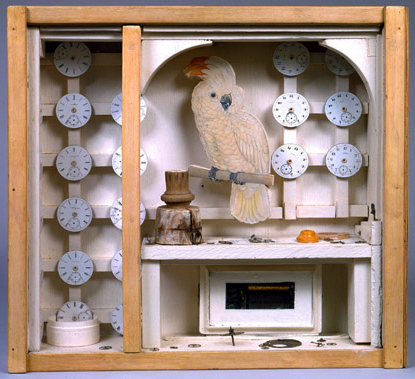 Joseph Cornell, known for being so shy that he disappears for an hour in the bathroom to avoid social interactions, hosts a party at his house, with art critic Dore Ashton, writer Octavio Paz and his wife, and editor Barbara Burn.

Knowing his love for desserts, Barbara had baked a pie, and thus, I’m inclined to think, set the tone for the long afternoon. Joseph, who knew of my friendship with Paz, had asked me and when he caught sight of Octovio’s vivacious French wife, he smiled broadly — something few of his acquaintances had ever witnssed. Usually Joseph’s smile was small, hesitant. During the afternoon, Joseph spoke with unaccustomed ease, bringing forth his knowledge of French poetry and engaging in an animated discussion of Mallarmé’s sonnets with both Octavio and Marie-José [Paz’s wife]. He took us to the cellar, showed us all his works in progress as well as some completed boxes and thoroughly enjoyed himself. Before we left, he drew me aside, and whispered with a certain ingenuousness: “Was he really an ambassador?”