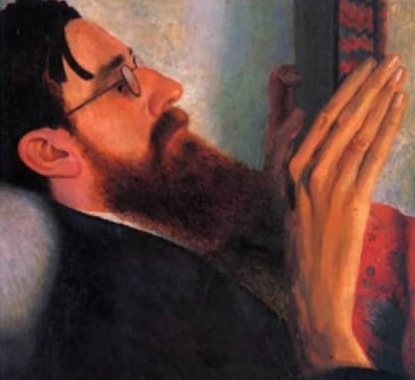 Dora Carrington, known as Carrington, committed suicide. She was distraught over the death two months earlier of her close friend, Lytton Strachey.

“Close friend” is inadequate to describe their relationship. To say it was complicated would be an understatement too. They lived together for some years, but it seems to have been platonic. He was gay, while she was conflicted over her sexuality and had affairs with men and women. On the night she agreed to marry another man, Carrington wrote a love letter to Strachey while her fiance slept beside her. Wait, it gets better! Strachey paid for the wedding, and came on the honeymoon. Weird, huh? They seemed to believe they were soul mates even if they weren’t romantically involved in the conventional sense. Yes, it was complicated.

Carrington had always marched to her own drum–going by her last name only, cutting her hair in a pageboy cut when it wasn’t fashionable, dressing androgynously, painting on unconventional surfaces like signs and tiles, and leaving her work unsigned.

She was associated with the Bloomsbury Group due to her relationship with Strachey, but she wasn’t one of them. She was friends with Vanessa Bell and painted E. M. Forster’s portrait. She designed woodcuts for the Hogarth Press, Virginia Woolf’s husband’s business. Woolf wrote of her in her diary that Carrington was “odd” but that “one can’t help liking her.”

She didn’t make efforts to show her work during her lifetime and until the late 1970s was almost unknown, apart from her relationship with Strachey. The Director of the Tate Gallery London called Carrington “the most neglected serious painter of her time”, though two of her works are in the Tate Gallery London now. Emma Thompson portrayed Carrington in a not-bad little movie about her relationship with Strachey in 1995.

Two months after Strachey died of stomach cancer, Carrington committed suicide with a gun she borrowed from a friend.