A Long Overdue Thank You Letter to Sue Coe

People always ask me how I became a vegetarian. Usually this happens over a meal, after we’ve placed our orders (theirs meat, mine veggie) which makes it a bit awkward for me. It just doesn’t seem like good manners to discuss the gory details there at the table. But since this is ultimately a blog about the power of art, I’ll share a bit more today.

I remember the day I became a vegetarian like it was yesterday, though I can’t remember whether the year was 1997 or ’98. The artist Sue Coe came to the University of Connecticut to give a lecture about her political artwork, the overall theme of which could be summed up as fair and dignified treatment for all. In the 1980s, her paintings and prints dealt with issues such as apartheid in South Africa and the violent gang rape of a woman in New Bedford, Massachusetts. (This incident was also the inspiration for the movie The Accused, starring Jodie Foster and Kelly McGillis, and spurred the passage of many so-called “Good Samaritan laws”).

Eventually, Sue expanded the idea of who deserved fairness and dignity, as her artwork began exploring the meat and farming industries. Wanting to see the inside of a slaughterhouse for herself yet discovering that no executive would allow a self-described artist into the plants, she said she was a journalist, one who wanted to tell the world what really went on in the meat business. To the executives, she implied that she was on their side but in reality, I think she viewed herself as an undercover cop on a mission. She observed what was happening, and began painting what she saw. 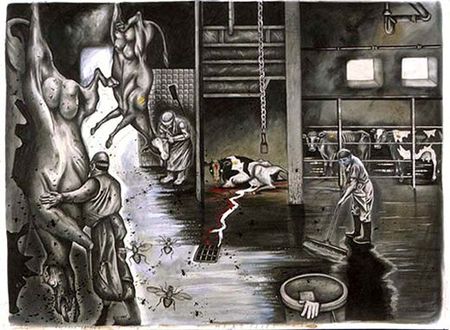 The stories behind her artwork involved anecdotes I had heard before: about stun guns, illness, cramped conditions, sicko employees who tortured animals before killing them. Although I’d thought these tales were horrific, I hadn’t been moved to stop eating meat yet.

But that day was different; seeing Sue’s paintings blown up to 20 or 30 feet tall on the projection screen in the auditorium was extraordinarily powerful. I remember one painting in particular, about a cow who was left dangling by one leg, up in the air, howling in fear, suspended by a chain…all because the factory bell rang, and no one wanted to take the extra few seconds to put her out of her misery before taking a coffee break.

And the slides kept coming. There were many stories like that, about suffering, and about callousness toward that suffering.

A picture is worth a thousand words; that is the day I realized that I was truly a visual person. Or, maybe it’s as simple as Linda McCartney once said: “If slaughterhouses had glass walls, we’d all be vegetarians.”

I left the lecture saying that I would never eat meat again, and I haven’t.

As we make strides toward being more “green” in general, and realize the costs of factory farming (chemicals put into our bodies, girls beginning puberty earlier due to hormones in food, foodborne illness such as mad cow disease, the toll on the environment, etc etc, not to mention the morality of it), this seems like a good time to say thank you to Sue Coe. I have enjoyed every minute of being a vegetarian, and I’ve saved the lives of at least 90 animals per year since 1997 or 1998. (That’s 1,170 or 1,260 animals–wow).

I think that was also the first day I realized that art could be genuinely powerful, so in that sense Sue Coe has also been a mentor to my own move into political art. Though I don’t paint about animal rights, but rather gay rights, I think we’re both on a similar track in that we care about fair treatment and dignity for all.