An Evening with Cleve Jones 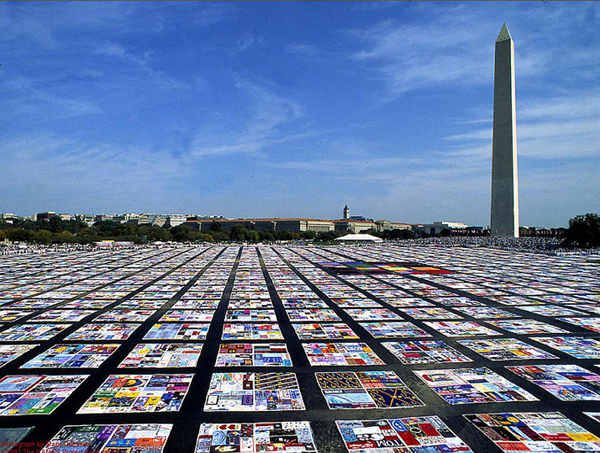 I had the great chance to see Cleve Jones on Friday at a small Q&A-style talk.

Some might know him best as the young activist from the movie Milk. I first heard of him when I lived in the San Francisco Bay Area during the late 80s and early 90s; he was quoted in the paper on a regular basis about the rampaging AIDS epidemic.

His activism on this issue led him to create the world’s largest public art project, the AIDS Quilt. The quilt is made of panels, 3 feet by 6 feet, which memorialize people, mostly young gay men, who have been lost to AIDS. The panels are sewn and decorated by friends or family, and often include more than a name: perhaps the dates of birth and death, a silkscreened photo, a favorite quote, a sentiment from the survivors. This quilt is like any other, with a variety of colors and styles from panel to panel; some are somber, some are over-the-top fabulous, with everything in between.

I saw the quilt on Sproul Plaza at UC Berkeley, and will never forget the panel that read, under the deceased’s name: “Received a Purple Heart for killing a man, and a discharge for loving one”. I cried.

The personal is political.

The quilt has gone on multiple tours of the country, been laid out on the National Mall in Washington DC, and was even part of President Clinton’s first inaugural parade. This past year, Cleve was involved in another kind of public documentation, when he began Testimony: Equality on Trial. This performance and video project was a response to the Prop 8 trial, which took away the right of gays in California to marry. Our Supreme Court blocked this historic trial from being televised for the American people, so to provide access to the details of the trial, Cleve hit on a simple idea: Verbatim transcripts of the trial were reenacted in public places, filmed, and uploaded to the internet so that anyone could watch them. (Prop 8 was found to be unconstitutional and is now on appeal).

The main thrust of Cleve’s remarks the other night were that the most effective messages in the struggle out of second-class citizenship are the ones that reveal the humanity behind the statistics. The quilt panels, and individual videos that are posted online (think the It Gets Better Project) get people talking. The act of coming out to family and friends attaches a friendly face to what might otherwise be only a scary abstract.

This is old-fashioned, grass-roots story-telling. The personal is political.

Back to the studio, to tell some more stories.