Anatomy of an Artwork

I’ve been working on a painting which will be a donation for the New Bedford Art Museum, and I’ve enjoyed the project so much that I wanted to share some thoughts on its evolution.

This project is in support of the New Bedford Art Museum and their mission (read more about it here) and is based on the current exhibition called Taking Flight!  The Birds of John James Audubon from the Collection of the New Bedford Free Public Library.

The idea was create a piece–any kind of piece–abstract, figurative, a painting, drawing, sculpture, mobile, etc etc–based on one of the prints in the exhibition.  A wide-open proposition!

I chose the Barn Swallow.

One of the reasons I chose this particular bird was because of fond memories of watching a nest of swallows on my patio in Taormina, Sicily.

Every morning, I would spend time on the patio, watching them.  I was really taken with that nest, and how it was a little masterpiece in and of itself. It was placed very close to the ceiling, and the swallows really had to maneuver to get themselves in and out of such a tight space.

The nest was clearly made from small chunks of mud, which were in some kind of pellet form, and somehow pasted together to make this little fortress.  I don’t even know how they found or made mud–Sicily is an arid climate!  I wondered if the swallows carried the mud in their mouth and regurgitated it, the way they feed their young.  And how did they stick it to the wall?  I would have loved to have seen them actually build the nest but no matter what, I was hooked and watched them every morning.  They were always peeking out, then wriggling to the edge and flying away.  Then coming right back, and wriggling back inside there, peeking out again, repeat.

Those swallows might have been cliff swallows.  One difference I noted between the swallows I came to love in Sicily, and the Barn Swallow in the Audubon print was the grass in the Audubon nest.  I knew that my piece would also contain grass, to be true to the representation of the American bird, and also to give me the chance to use a lot of different materials in my piece.  I decided to really push it.

In this vein, I also decided to work more sculpturally, to expand on the textures and bas relief that I often use and just go all-out in that regard, while still keeping it essentially a painting.

I also wanted to work figuratively on this piece, rather than abstractly–something I haven’t done in years!  The reason is that I wanted to take advantage of working outside my body of work and ideas.  I could have made an abstract colorful painting (as I usually do) inspired by a bird–but I wondered to myself how it would be distinguished from any other painting I’m working on at the moment.   I definitely wanted a very clear distinction between this piece and the rest of my current body of work…partly because they’re very different ideas, and partly to give myself a challenge.  What the heck!  So I thought that leaving abstraction behind for a while would be a good idea for this piece.

And in keeping with this theme of mixing it up and stretching myself, I had to temporarily move my studio to the kitchen table because of an air conditioning malfunction at the studio. You can see it was quite a production! 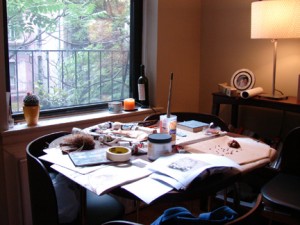 Stay tuned for the next report!

And if you haven’t gotten your tickets for the Garden Party yet, you can get them here.  My painting will be part of the silent auction!