Artist Donates 10% of Exhibition Proceeds to It Gets Better 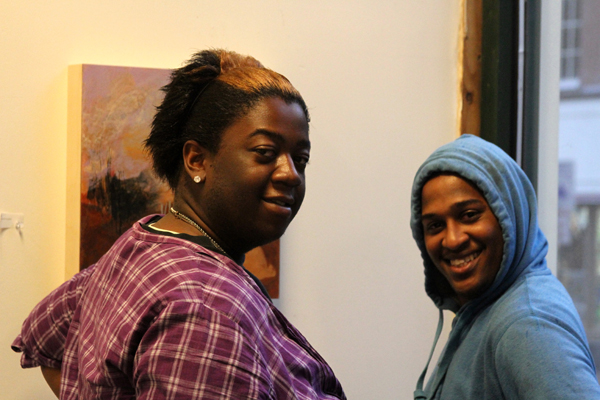 Maura McGurk was so moved to hear of the suicides of several teenagers in Fall 2010, bullied because they were gay, or at least thought to be gay, that she began memorializing her anguish for the teens in paintings.

Simultaneously in the Fall of 2010, columnist and activist Dan Savage founded the It Gets Better Project, which sprang from the same concern for bullied gay teens.

In July 2011, McGurk and the It Gets Better Project came together when she exhibited her anti-gay bullying artwork in Norwich, Connecticut and donated 10% of proceeds from sales to the non-profit organization, to support their work with LGBT youth.

McGurk’s artwork was on view at the Wauregan Gallery in an exhibition entitled Lavender Menace: Paintings by Maura McGurk in Response to Gay Bullying. From that show, she sold paintings of various sizes on paper and wood panel, as well as painted puzzle pieces. The puzzle pieces were part of an installation that was dismantled and sold piece by piece during the exhibition.

McGurk says that although the subject matter of teen suicide and gay bullying is weighty, her message, like that of the It Gets Better Project, is uplifting and supportive. As such, the artwork itself is colorful and attractive.

“I want my work to have a chance to tell its story, and so I try to make it beautiful through colors and textures, so you want to spend time with it,” McGurk said. “And if you spend time with it, hopefully something else will emerge. Lots of art has been made about war and tragedy, and some of it is really bleak and ugly. Let’s face it – tragedy is ugly. But I can’t make my work that way; that’s not me.”

McGurk’s anti-gay bullying artwork can be viewed on her website.

More about Maura McGurk: Believing in art’s power to change the world, Maura’s current work supports LGBT youth by taking a stand against gay bullying. Maura is has exhibited her paintings at various venues in New York, New England, and Italy.  Her work is held in over sixty private collections in the United States, Europe, and the Middle East.