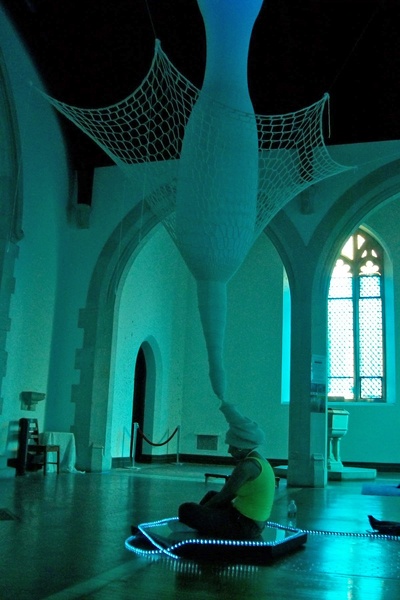 I attended the Electronic Arts Festival in various locations on Governor’s Island, my new favorite place to look at art.

In the Trinity Chapel there, we participated in Blue Morph, an interactive installation about “nano, not color”, by Victoria Vesna and James Ginzewski.

The installation is set up this way: you enter the chapel, which is bathed in blue light, and encounter various larger-than-life chrysalis structures hanging from the ceiling as you move through the space. At the point where a priest probably once stood, the largest chrysalis hangs over an octagonal platform which is raised very slightly off the ground. By sitting in the octagon, and donning the knit cap at the tail end of the chrysalis, you will trip the mechanism that begins a film which plays in front of you on the wall.

The film features the (presumably real) sights and sounds of the metamorphosis of a caterpillar, but these sights and sounds are jarring, loud, and sudden, not the graceful transitions we’ve come to associate with butterflies.

The large screen at the front fills with images of blue, scaly growths, which seem to suggest butterfly wings under the microscope, yet the statement on the wall says the show is about cellular change and “nano, not color”. Although I never learned what that meant (but wished I could have), I very much related to the statement that cellular change means “sudden surges of activity interspersed with stillness and silence”. Isn’t that just like life? That the statement went on to relate it to the financial markets, recent global upheavals, and natural disasters (on the weekend after Hurricane Irene wreaked havoc in our part of the world) made it even more resonant.

In a way, it makes sense that butterflies should experience the same stop-start, growing-pains-then-cruise-control that we all do, all throughout our lives.

The curious artist and color theorist in me still wants to know what nano is, and how it supersedes color in this case, but reading the statement alone was a joy, and almost enough illumination for one afternoon.