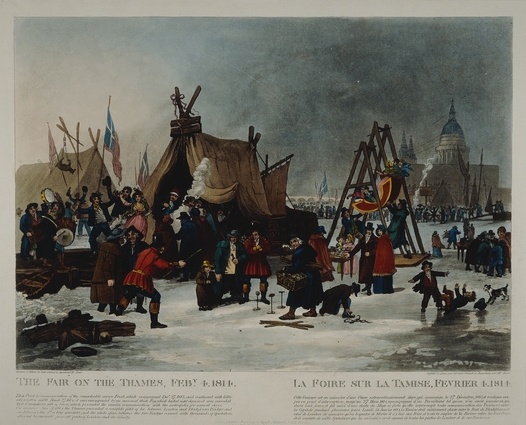 Luke Clennell, The Fair on the Thames, February 4th, 1814

February 4, 1814
Luke Clennell creates a hand-colored etching to commemorate the “Frost Fair” held on the River Thames while it was frozen that winter.

Some background is necessary to understand: Before 1831, when it was demolished, the old London Bridge was built on arches that slowed the flow of the River Thames enough that it froze during cold winters. With the river frozen, fairs were actually held on the iced-over river. The “frost fair” that happened in the winter of 1813 – 1814 was the largest of the whole century.

A contemporary eye-witness decribed it as:

swings, bookstalls, dancing in a barge, suttling [drinking] booths, playing at skittles, and almost every appendage of a fair on land was now transferred to the Thames… the view of St Paul’s and the city with its white foreground had a very singular effect.

This print was published in May just after the river had begun to thaw, and is located in The British Museum. Luke Clennell was a successful painter and illustrator until 1817, when he was committed to an asylum after a series of of depressive episodes. He was never well enough to work again and died in 1840.