I Saw Someone Who Jumped Off a Bridge This Morning 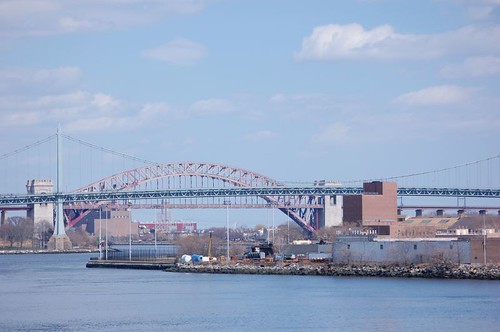 I saw someone who jumped off a bridge this morning.

On my usual morning walk along the East River, I noticed several NYC fire trucks on the other side of the river.  They were parked at intervals, facing the water, lights flashing.  I felt a little queasy at the thought of a terrorism-related threat but then also considered that it could be a movie or television shoot.  I kept walking.

Way too elaborate for filming an episode of SVU.  When I approached the curve by Gracie Mansion where I usually turn around, there were three people gathered, looking at the ferry dock.  Various Police and Fire Department boats had closed ranks around the pier, and about three dozen officers were in the process of assembling ladder pieces.

We were told that someone had jumped off a bridge, and the current had carried him here, where the pier sticks out into the river.

They put a bundle on a wire stretcher, loaded it up with blankets, and lowered an oxygen mask into place.

The officers lined up on both sides of the stretcher, like pallbearers, one of them calling out “Left Right Left Right” like a drill sergeant, as they carried the stretcher away up the steep winding path to get to the road.  They passed right by me, so close I could have reached out and touched any of them.

The jumper was young, with dark, wet hair.  I don’t know if he was a boy or just barely a man.  I don’t know what made him jump off the bridge, or if he’ll recover.  I don’t even know which of the several nearby bridges he jumped from.

But how could I not think of the bullying that drove Tyler Clementi to jump off a bridge just about 6 miles away?  How could I not be reminded of all the other teen suicides due to bullying–anti-gay or otherwise?

As I walked home, I was struck by the incongruity of the scene:  Tents are waiting outside Gracie Mansion, in advance of a party.  Landscapers prune bushes and plant flowers in the park.  New joggers and dog walkers enter the path, completely unaware of what just happened.

My heart is heavy, thinking of all the people who are troubled by things they believe no one can understand.