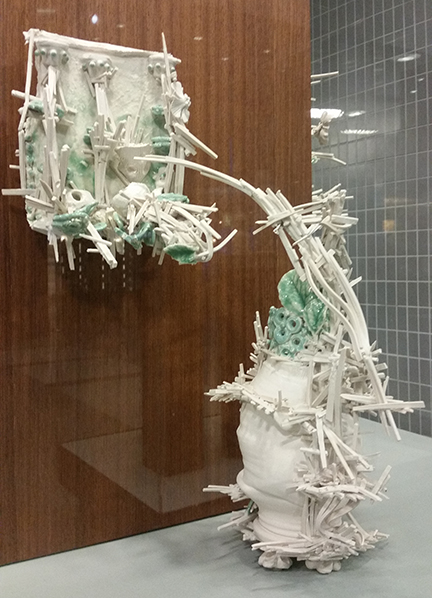 I love going into what I call “real places” and seeing “real art”. For example, there’s an editioned print (not a poster) in the bathroom at the mall, or a quality painting hanging permanently at a bar.

I was in the Philadelphia International Airport recently, and even though rotating art exhibitions are becoming more popular at airports, I was still struck by an exhibition called Invisible Cities by Terri Saulin Frock. Regrettably, I could spend just a few minutes perusing the work before I had to be on my way, but it was technically extremely well made (I’m becoming more and more insistent on that point), beautiful in every sense of the word, and conceptually fascinating.

Small round ceramic vessels transition into one another via a tumbling conglomeration of ceramic matchstick-like bridge structures. Others stand on their own while simultaneously sprouting and supporting an entire civilization of these matchsticks from their tops. Others tilt and bow to matchsticks sprouting from their sides and by their feet. They’re a combination of the lovely – imperfectly handmade, with fingermarks to prove it – and geometrically precise additions, which grow lives of their own as they multiply. The tension between two extremes is fascinating: organic and geometric, stable and unsteady, individual and proliferating multiples, vertical and horizontal. 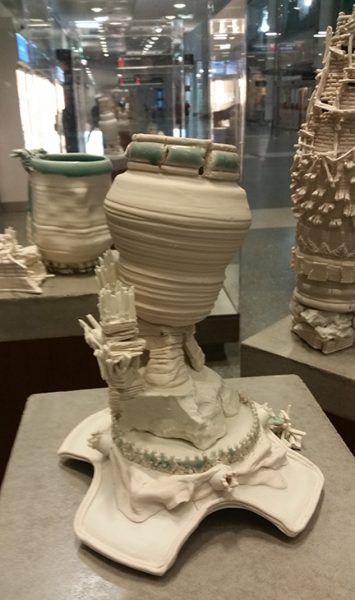 The source of inspiration is a short story by Jorge Luis Borges, called “The Garden of Forking Paths” (“El jardín de senderos que se bifurcan”). I haven’t read this story, but have read Borges off and on; the last time I made a conscious effort was in grad school, and I feel it might be time again.

A synopsis of the story: a Chinese professor, Dr. Yu Tsun, living in Great Britain during World War I, is spying for the Germans and is about to be caught. He desperately needs to communicate an important bit of information – the location of a new armory – before his imminent capture. With British intelligence hot on his heels, he visits another professor, while pondering the thwarted creative life of his ancestor, Ts’ui Pên. Pên had been a respected government official but gave up this post in pursuit of two goals: to write an epic novel, and to create an epic labyrinth, “one in which all men would lose their way”. After his death, anyone who attempted to read what he wrote found it to be nonsense that circled back on itself, and no one ever found any labyrinth. So much for that. Tsun meets Dr. Stephen Albert, who has studied Pên’s seemingly meager output. Albert excitedly reveals that Pên was a genius, not a slacker after all; his life’s work was creating a novel that was a labyrinth in and of itself. The reason it read as nonsensical was because each step in the novel, each character’s decision, simultaneously led to every possible outcome of that step or decision. It was not a linear path, A to B to C, but an ever-expanding network of forking paths, each yielding a multitude of rich possibilities, which circled around each other and sometimes crisscrossed back to an earlier point. Albert illustrates his example by saying that in their current scenario, two possible circumstances are that Tsun visits his home as an enemy, yet from a different series of alternate decisions, also visits as a friend. All possibilities are simultaneously present. Tsun, extremely gratified to learn of his ancestor’s victory, sees his pursuer out the window, takes out a gun, claims he comes as a friend, and deliberately shoots Dr. Albert. He is subsequently convicted of murder and sentenced to death. But he also wins, because the Germans bomb the armory during his trial. He has successfully communicated the location of the armory to them – in a town called Albert – by murdering someone named Albert so that the Germans would read about the crime in the news and act on his planted clue.

Yeah, let that sink in.

So these invisible yet proliferating cities, with their contradictory yet completely harmonious natures take on a life of their own. What a beautiful homage to this story. And what a mindblower. 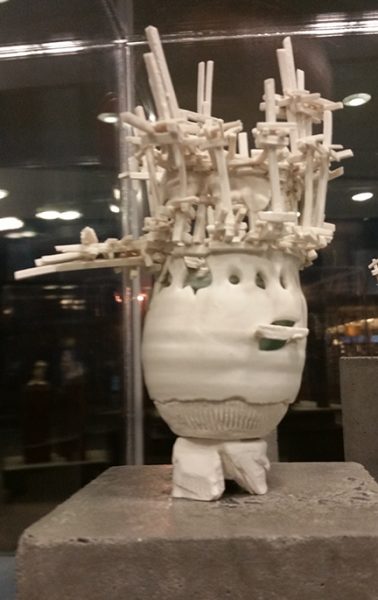