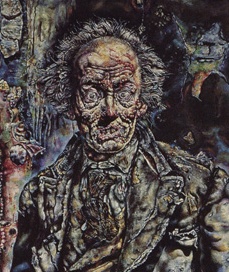 Ivan Albright (1897 – 1983) was an American painter and printmaker whose work dealt mainly with themes of life and death, decay, and the effects of time. His depiction of exaggerated aging as well as the all-over eruptions of growths and details lend his work a dark and unsettling quality, suggesting a sort of vanitas for the 20th century.

His most famous work may be The Picture of Dorian Gray, which was featured in the Oscar-winning film starring Angela Lansbury (love her). Based on Oscar Wilde’s novel, the Faustian themes are a perfect match for Albright’s style: the extremely handsome Dorian Gray makes a deal with the devil that his painted portrait will age, but he will not. The portrait becomes more and more grotesque as it ages and reflects Dorian’s sins.

Albright was born in the suburbs of Chicago. He studied at several schools in the Chicago area, including the School of the Art Institute of Chicago, and worked as a medical illustrator for a hospital in France during World War I. This job may have influenced his later style and themes.

Albright’s working method was obsessive; he painted his studio black and wore only black to eliminate possible glare, and often used brushes with only one hair. Many works took a year, two years, even ten years to complete. He estimated that he completed one-half of a square inch of a painting each day, and never changed the painting as he progressed.

He said that he was bored by bland titles, wanting them to convey “something that the painting said” and not only what it depicted. Thus, his work sports titles such as That Which I Should Have Done I Did Not Do (The Door) and Into the World There Came a Soul Called Ida.

Albright was extremely protective of his work and overpriced it at 30 to 60 times above what other artists charged in order to forestall sales. The Door won a purchase prize from the Metropolitan Museum of Art, which included a place in the permanent collection, but he refused to part with the painting and accepted a lesser prize rather than give it up. Needless to say, he still owned almost all of his work at the end of his life; he donated it to the Art Institute of Chicago (my favorite art museum).

Interestingly, his next door neighbor for many years on Division Street in Chicago was a well-connected art dealer named Richard Feigen. Feigen was disgusted at what he believed was the poor treatment Albright received from the Art Institute. He wrote publicly in 2000 that the Art Institute deliberately undervalued Albright’s donation by $15 – 20 million, never displayed the collection in the separate room they had originally promised, and have never given him a fitting retrospective. He believed that Albright’s reputation remains diminished because of it.

Fun fact: Ivan Albright was the father-in-law of Madeleine Albright, the first woman appointed as Secretary of State, serving under President Bill Clinton. (After a long marriage, however, she and Albright’s son divorced before she served as Secretary).