JFK and the Power of Art 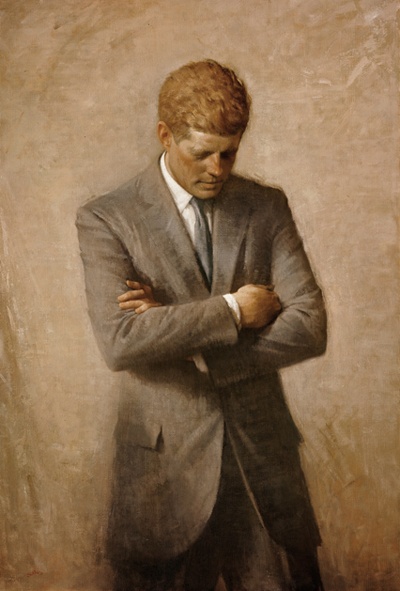 Today, we observe the 50th anniversary of the assassination of President Kennedy. As the details of that day and the aftermath are reexamined, one theme that stands out is how important art was to JFK and to Jackie. This story begins and ends with John Singer Sargent watercolors, and includes a private art exhibition arranged for the President and First Lady in Texas, the night before he was killed.

Part of Jackie’s famous redecoration of the White House included a loan of six John Singer Sargent watercolors from the Museum of Fine Arts in Boston. Jackie placed these watercolors, which brought some requested “Boston complexion” into the White House, in the family’s private room. Knowing that the Kennedys loved to surround themselves with art, a group of art collectors from Fort Worth decided that a private art exhibition would provide the right touch for a planned presidential visit in November 1963.

The collectors were actually horrified at the accommodations in Room 850 at the Hotel Texas in Fort Worth and put together a plan to specially decorate the suite to welcome the President and First Lady when they arrived on the evening of November 21, 1963.

From their own private collections, the local collectors chose works which were close to the Kennedys’ hearts–for example, Impressionist works by Monet, just for Jackie–and placed the work thoughtfully throughout the rooms. They included sculptures by Picasso and Henry Moore, paintings by Van Gogh, Thomas Eakins and Marsden Hartley, and other works.

I am indescribably moved by the thought of these citizens giving of themselves in such a thoughtful way, trying to improve the President’s personal, after-hours moments in their city. It’s even more poignant, knowing that this display of affection was one of the last to be offered to him while he was alive. The president and First Lady spent the evening surrounded by the artwork, but just a few hours after leaving that hotel room, the president was shot and killed.

The 16 pieces have been reunited at the Amon Carter Museum in Fort Worth now for a memorial exhibition.

This circles us back to the White House, and the John Singer Sargent watercolors.

After JFK’s death, Jackie and the children moved out of the White House, to a new home in Georgetown. Jackie requested an extended loan for four of the six Sargent watercolors from the MFA Boston. She wrote a personal note in December 1963, thanking the museum, and saying that the works had been:

in the room — our only room in the White House which was our private happy sitting room — where the children tumbled around — where we sat with friends. Whenever I think of all our happy days and evenings in this strange house — which I dreaded so much coming to — I think of him sitting in his favorite chair — with the Sargents over his head.”

But the watercolors’ ability to evoke these happy memories changed over time. Just three months later, Jackie wrote the museum again to say that she could not continue to live with the Sargents. Her handwritten note explained that she “simply could not bear to see them again now”. Out of all the possessions which brought on sad memories for her, “these would be the crowning blow.” Heartbreaking words from a widow, and so she shipped the paintings back.

But her last words to the museum were: “You should put in their history that they were the pictures he loved so much.”

The MFA recently found Jackie’s letters while researching an exhibition of Sargent’s watercolors. They’d been forgotten in the archives, and the relation to the anniversary of JFK’s assassination was coincidental, but it gives us a chance to reflect on the power of art to move people.

“They were the pictures he loved so much.”