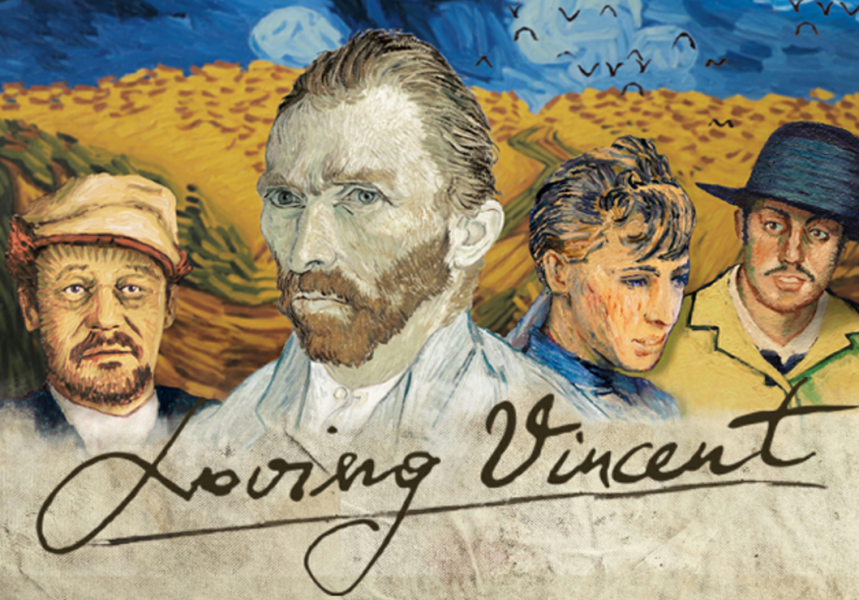 Some thoughts on the movie Loving Vincent . . .

It is both spectacular and maddening.

The plot is ridiculous: Armand Roulin, twenty-something son of the bushy-bearded postmaster whom Van Gogh painted so memorably, is tasked by his father with traveling to Paris in order to deliver Vincent’s final letter (to his brother, Theo). Armand has reservations about doing this, and ponders his obligations while drinking too much, but eventually goes to Paris, where he discovers that Theo has also died. Armand quickly decides that he must travel to Auvers, where Vincent died, in order to deliver the letter to a friend with whom Vincent was close in his final months (Dr. Gachet, also memorably painted by Van Gogh).

First plot objection: Why didn’t Armand even consider locating Theo’s widow, Joanna, in Paris? If I were her, and I found out this drunken punk decided to give my spouse’s final letter to a friend of approximately one year’s standing, I’d be furious! [But of course, if he’d attempted to find Joanna in Paris, this would be a different movie].

Here’s what I loved about the movie:

Here’s what bothered me about the movie (in addition to the overarching plot):

SPOILER ALERT:
No one loves a good mystery more than me . . . but if I heard this correctly, the final analysis is that the bullying teenager basically committed manslaughter by fooling around with a gun…while Vincent committed a suicide of sorts, by stoically not accusing the teenager, and letting it be assumed the gunshot was self-inflicted . . . meanwhile, Dr. Gachet, who acted as Vincent’s confessor and entertained his deathbed laments that he was a financial and emotional burden on Theo, essentially granted Vincent’s suicide wish by not removing the bullet and allowing Vincent to die (slowly) . . . sounds like murder! . . . especially since, as another character points out, Gachet had been a military doctor in a war zone; he should have been able to easily remove the bullet, particularly since it wasn’t immediately fatal. Physician, do no harm!! Would a doctor really have allowed a healthy man in his thirties to slowly and painfully expire like that?

The murder theory comes from a biography by Naifeh and White. Maybe there is a case for that, but knowing that the filmmakers have invented some (silly) aspects of the story and smoothed over others to make for a tighter film, I feel like I need to research for myself before I can believe this.

The film is beautiful in many places. Not many films can make you catch your breath – and not just once, but over and over.

I want to keep watching it . . . but maybe with the sound off? Yes, I’d like to see it again. There is real magic in this movie, even though you are also a little too aware of how hard the magician is working to produce the rabbits.