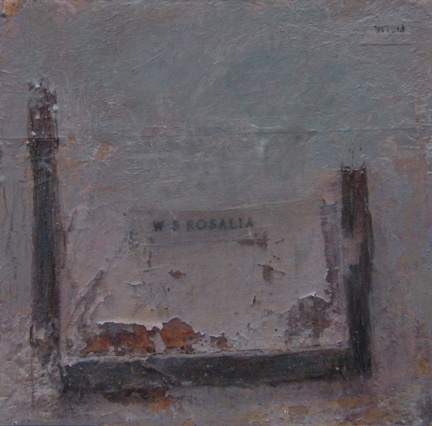 Lament, Acrylic/Mixed media on board, 5

Maura McGurk was chosen as a Featured Artist of climate/gallery based on submission of her painting Lament.

This painting was part of the exhibition NEVER THINK small and was judged by Kathy Murphy, publisher of Modern Painters Magazine, as one of the Best in Show.

McGurk said the work was inspired in part by her friend’s grandmother who had recently become ill.  The imagery comes from a photograph McGurk took of a shrine in Palermo, Sicily, which was built into a wall near the Vucceria market.  The somber color, title, and reference to the shrine suggest a lament for the dead but McGurk asks that the piece not be read only as a requiem.

“Saint Rosalia, whose name is written there in the shrine, is the patron saint of Palermo.  The idea of a patron saint who looks out for your interests and offers protection has always been appealing to me, not from a religious standpoint (though I did grow up with people around me praying to Saint Anthony and other saints) but from a superstitious one.  You pray to Saint Anthony to bring you the car keys you misplaced and then you find them.  That suggestion is pretty powerful.

“So while I was thinking of my friend’s grandmother while I painted it, and feeling sad to hear that she’d fallen ill, I don’t think of this piece as only sad and contemplative.  People who knew, or knew of, Audrey (or Big Nana) also know that she was funny, devilish, generous, as well as a lover of sad country songs and good martinis.  She’s a person everyone tells stories about, someone people remember.  So thinking of this very strong personality at the same time as I was incorporating a reference to a patron saint makes the painting act a bit like a talisman, something with a little strength behind it, something to watch over you.”