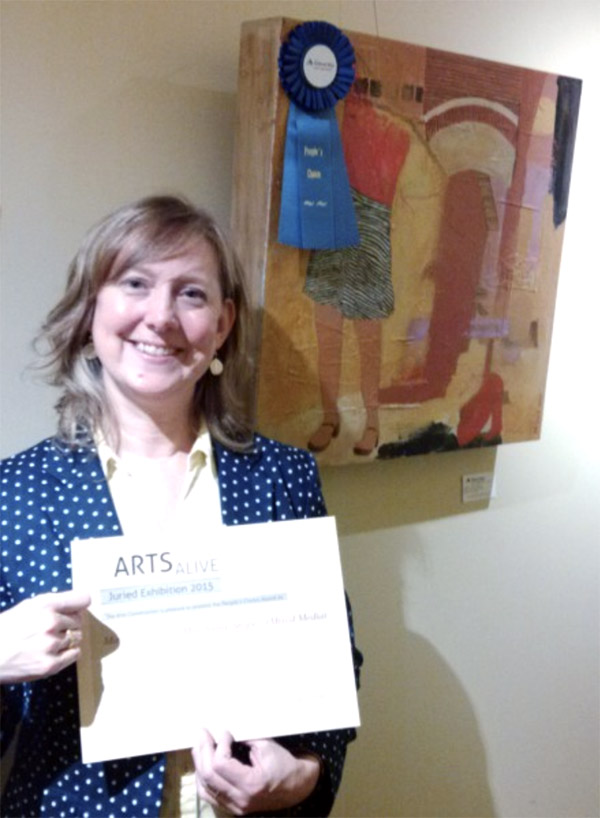 McGurk said that her main inspiration for the painting came from an observation made at her last opening, by a friend’s husband who claimed to know nothing about art.

“He said that he noticed that I used a lot of patterns, but painted over them with layers of paint. Then he apologized for asking such a dumb question, but wanted to know what it meant to me to hide all those patterns underneath. Dumb question?! I was embarrassed to tell him that I hadn’t even noticed that in my own process!” McGurk laughs at the memory.

She says she took this as a personal challenge to work more directly and consciously with pattern. This, in turn, led to a new awareness of repeating shapes and motifs in the world around her. During a trip to Siena, Italy this summer, her eye was drawn especially to stripes.

She says that stripes were evident all around her: single bricks placed side-by-side lining an archway, rows of bricks angled in opposing directions that created giant stripes across the main piazza, the bold black and white horizontal marble of Siena’s Cathedral, the stripes in the flags around town, and even the black and white stripes in a tourist’s skirt, which echoed those of the Cathedral.

Drawing a little bit from each of these scenarios, McGurk consciously constructed a patterned work based on Siena’s stripes. “It’s a little more painstaking than I usually work, and it was tempting to sweep across the whole thing with a big brush loaded up with paint. But I made a deal with myself, and a deal is a deal”.

The Arts Alive exhibition will be on view at City Hall through January 6, 2016.