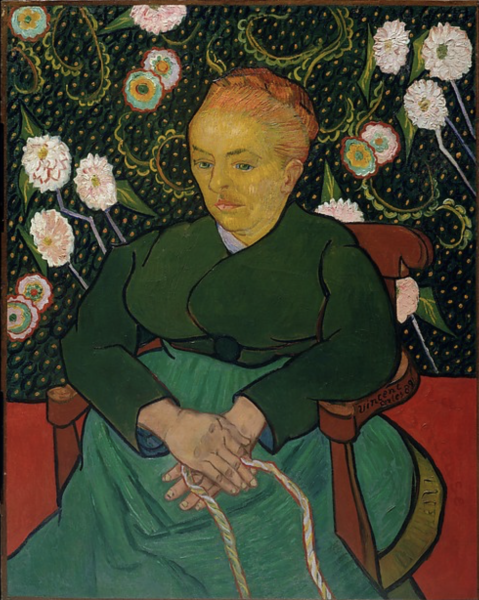 Visiting Arles, France made a huge impression on me. This is where Vincent Van Gogh had the most productive painting period of his life – one of the most productive of any artist’s life, in fact. Almost everything he painted at Arles is recognized as a masterpiece, and is recognizable by even casual observers: his bedroom, sunflowers, the cafes. It’s where his palette took on the bright yellows that we recognize as classic Van Gogh. It’s where he realized a dream of creating an artist residency, so to speak; Paul Gauguin came to join him to paint in the bright sunlight, and was his roommate. It’s also where Van Gogh really began to descend into madness.

Standing in this room in the Met, there were at least five van Goghs around me that were painted in Arles. It was easy to picture these, and dozens more, hanging on the walls of Vincent’s cottage, and stacking up along the wall. I was in New York, and I was in Arles at the same time.

Seeing La Berceuse was difficult. This was the painting he was working on right before his major breakdown. You’ve heard of it – he cut off a piece of his ear, possibly threatened Gauguin, who moved out, was committed to an asylum for the first time, and spent the rest of his life actively battling mental illness – while continuing to paint, of course, even if it was the hallways and grounds of his asylum.

La berceuse meant “lullaby”, literally, the woman was rocking a cradle, by means of the small rope that you see in her hands, which was tied to the cradle that lies outside of the picture frame (if you didn’t know the backstory, you might not even wonder what the string in her hands was). Van Gogh painted a series of these (he said this particular version was the best) and struggled mightily…he explained his inspiration for the painting, which was much larger than any person would divine on their own by just looking at it. He wanted something to comfort sailors who were at sea in horrible storms; he envisioned creating an entire altarpiece of multiple berceuse paintings, with sunflower paintings as candelabras scattered amongst the soothing images of lullabies and rocking cradles (albeit, invisible cradles). Vincent often used the metaphor of stormy seas to describe his own feelings of being overwhelmed and adrift, so it’s fairly obvious that he wasn’t just talking about local sailors, but also himself. So, there was much riding on this project for him personally and artistically. His various stresses converged – the stress he felt over this very high-stakes (for him) project, the stress on his body because he wasn’t taking care of himself and drinking too much, and the stress of learning that his own behavior was driving Gauguin to depart from their shared artistic experiment in Arles.

And so, he snapped. On Sunday, December 23, 1888, he cut off his ear (or at least a part of it). Gauguin, although he was at a hotel that night due to the tension in the house, has described the blood spatter evidence, so we know that Van Gogh either cut himself in front of La Berceuse, or cut himself in another room, then went to stand in front of it.

What a loaded painting. I don’t care for it, visually; I don’t think it stacks up to his best Arles work – which I was surrounded by, at least five or more in a ten-foot radius. But this is art history right in front of me.