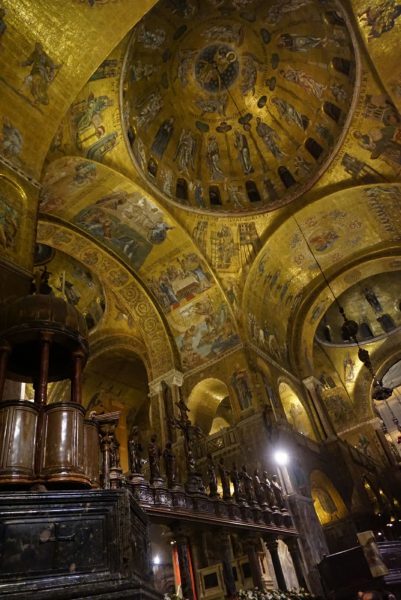 Being in Venice on Christmas Eve, I had to attend Midnight Mass in the Basilica di San Marco. I was attending not as an active parishioner, but out of a deep sense of curiosity: how would one of the largest and most famous cathedrals in the world “do” Midnight Mass? (Catholic roots run deep!)

For those who don’t know: Midnight Mass happens just once a year, on Christmas Eve. It’s a very special occasion to usher in Christmas. Most churches, even the smallest ones, work to heighten that experience by bringing out extra candles, decorating with evergreen, maintaining a beautiful crèche (the tableau of the babe in the manger) and so forth.

We waited for some time in a line that stretched three-quarters of the way through the Piazza di San Marco, but were able to get fairly good seats inside. San Marco is dazzling, known for gold mosaics rather than frescoes like some Italian churches, because the humidity near the water wouldn’t be as kind to fresco.

The mass was delivered in Italian, German, English, and French, each taking a turn while winding through various readings and gospels. While I was listening, I was mostly looking around me at the various artworks commissioned by the Catholic Church: enormous pillars of marble, golden chandeliers encrusted with red jewels, the large baby Jesus resting on poinsettias at the altar (even from this distance, clearly the largest and most beautiful statue of this kind I’d ever seen), the various statues, the pattern in the marble floor…

But the mosaics. Oh, the mosaics. They cover the ceiling as well as the walls, showcasing important figures and moments in the church, glinting down at us in all their beautiful longevity.

I found myself considering, not for the first time, their purpose…the basic idea is this: until just 50 years ago, the Mass was said in Latin, which no one but the most highly educated people, the priests and monks, would understand. No regular churchgoer would be able to follow along; this was as true in the 1960s as it was during the Renaissance. Therefore, the Church has always used visuals to communicate. Picture yourself in 1084, when the Basilica was consecrated in its more-or-less present iteration (although it was a private chapel for Venice’s leader, the Doge, and not for the public at that time). You can’t understand what’s being said, but there is an enormous, glittering Jesus covering the entire ceiling above the altar, reaching out toward you with one hand. You can look around and identify stories from saints’ lives, and you know who is who because of their symbols (San Marco, for example, is often symbolized or accompanied by a lion).

I remember being in Monreale in Palermo, visually devouring their mosaics, the first time I realized that the Church would have had me hook, line, and sinker if I were alive back then. You had me at hello.

Even as a child, I was always looking around the various churches I attended: the niches holding statues; the bas-reliefs on the walls, called stations of the cross, that told the story of Jesus’ crucifixion; the actual crucifix – huge – that hung behind the altar, and each individual church’s emphasized a different aspect of that death (some stoic, some peaceful, some downright gory); and of course, the stained glass windows.

On the few childhood occasions when I attended a Protestant church with another family, I was immediately struck with boredom by their simplicity of decoration. Sure, the kids got to come up and actually gather on the altar (forbidden to Catholics, but sort of cool) but it did not compensate for their plain white walls.

To this day, I wonder if I’d be an artist if I hadn’t grown up Catholic, wanting to fill white walls!

So this is all going through my head during Midnight Mass, in between staring up at the ceiling and walls and following along in Italian and English. A gospel according to John is being read, which equates God with life and light:

Somewhere in here, someone threw a switch that turned on the interior lights in the Basilica, so that we simultaneously heard the dramatic thump of many banks of lights being awakened, and saw the entire Basilica come to golden life before our eyes. We hadn’t even realized we were in the dark until the lights came on. *Now* we were looking at mosaics! *Now* we were clear-eyed, not peering into dark corners. Everything is illuminated. Everything is full of light.

That was Midnight Mass in the Basilica di San Marco, and that is vintage Catholic Church. Welcome to the greatest performance art ever staged.