Museum Reneges on Promise to Exhibit All Lincoln Portraits–What Would Honest Abe Say? 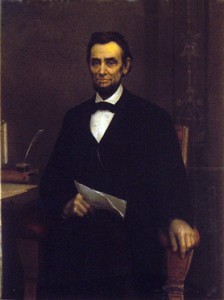 This Abraham Lincoln portrait, painted by Norwich, CT local son John Denison Crocker, was ripped from its frame in City Hall in 1994. The Slater Museum and the City of Norwich sponsored a contest with a purchase prize for the best copy of the original portrait.

Although I’m normally an abstract painter, I thought it would be good for me to stretch outside my comfort zone and copy the painting. It didn’t hurt that there was a purchase prize, but the detail that sealed it for me was that the Call for Entries stated all submissions would be exhibited in a gallery space for a month. There’s no better way to celebrate the completion of a painting than to have it hang in public where it can be appreciated, rather than tucked in the corner of a studio.

Plus, it seemed pretty hilarious to have multiple Abe Lincolns hanging on the wall, looking at each other.

The Slater sent me a CD (which I had to purchase from them for $5.00) with the contest rules and some images. The Submission Rules on the CD said:

“Portraits submitted must be unframed, 39” wide X 50” high, stretched and ready for Framing. All will be displayed at the Norwich Arts Center, from May 1 through May 29, 2011.”

Several newspapers, including The Norwich Bulletin and the Bridgeport Banner, posted articles stating the same, that “all submissions” would be exhibited for a month, and the winner announced at the opening reception on May 1. The articles listed the Director of the Slater as the source. The Director even authored one of the articles personally.

I got more and more excited about the exhibition. I think the promise and excitement of the exhibition was a major incentive for many of the artists. Without it, I wonder how many artists would have invested the time and money to make a portrait to the Slater’s exact specifications, in a style not their own, in an outdated genre that is not readily marketable to other venues?

I bought stretchers and canvas. I painted. I researched, in order to try to determine what was going on in the murkiness of the umbers in the background. I traveled two-and-a-half hours to Norwich (in each direction) to look at other paintings by the same artist.

I went to Sotheby’s to speak to experts in 19th century decorative arts. A big thanks to John Ward for his tremendous help; he even sketched me a gilt-bronze bookcase which is what he determined to be the object hiding in the shadows behind Lincoln.

But the real story doesn’t even begin until the drop-off date, April 15.

I rented a large vehicle to transport the large painting. I drove through downtown Norwich and giggled at the multiple Lincolns I saw being carried into the Norwich Arts Center. It was as surreal in real life as I’d imagined.

But when I got to the drop-off site, it wasn’t funny anymore, because artists were informed–then, at the last possible moment–that not all portraits would be exhibited after all, as originally promised by the Slater.

These phrases (and many more, but this is a family blog) ran through my head. I considered saying something at the time, but I didn’t. I didn’t want to hurt my chances before my work was even considered. I considered taking my work back with me out of principle, but I didn’t. That would defeat all those weeks of planning, researching, painting.

So I waited to see what would happen…

In the rejection email, the Director wrote that rejected artists were free to contact two separate exhibitions, with different missions, to see if they might accept our rejected portraits. No guarantees.

I wasn’t the only one who was upset. I heard that some artists threatened to sue, that some contacted the Board of Trustees of the Slater, and that others contacted the press. Good for them–we need to stand up when we’re being taken advantage of, and treated unfairly.

I called the organizer, a lovely woman named Elanah Sherman, who understood why there were artists with hurt feelings and a bad taste in their mouths over this experience. I told her that her group would look like heroes if they could find a way to open their show to include all of the portraits, as originally promised by the Slater. She called Dan Topalis (who I believe is a gallery owner in Norwich). They agreed to figure it out and provide space to all portraits.

Now all of our hard work can see the light of day.

[And as an unexpected bonus, Elanah told me, unprompted, how much she enjoyed my gay bullying paintings!]

So yes, I have learned quite a bit through this project. Besides confirming my dislike of canvas (I’m a panel and paper girl), strengthening my skills in value and measurement, reiterating the wisdom of Betty Edwards’ theories on drawing with the right side of your brain, and proving the benefit of trying something new (things I actively discuss with my students every week)…


I, unfortunately, relearned some hard lessons about the art world.

I’ve seen it many times before with various galleries, but I believed that a non-profit art museum was above reneging on its promises. I believed it would honor its word, and support its artists by treating them with respect and professionalism.

I was wrong about these things, and this was hard to swallow. I’m still angry that the Museum didn’t think the artists they solicited deserved to be treated ethically, fairly, or respectfully.

But I also learned that some people have the desire and heart to cut through BS and make things happen when they want to.

Many thanks, again, to Elanah Sherman and Dan Topalis, for making lemonade with lemons. And congratulations to all the Lincoln portrait artists, whose hard work will be acknowledged with an exhibition.

Maura is an abstract painter whose current work is about anti-gay bullying. You can see those paintings here.