I should have met the Reverend Howard Finster in 2000. 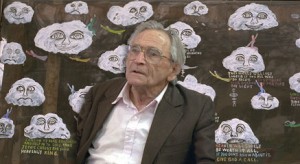 He used to sit on his front porch in Summerville, GA once or twice a week, at a scheduled time, to make himself available to his fans.  That included banjo players looking to jam, young art students, fans of the musical group REM…I didn’t realize all this was going on, and showed up on an off day.  But I did get to spend time on his property, which he named “Paradise Gardens”.  If you ever go to visit, which I recommend, you’ll walk around with your mouth wide open most of the time.   I should explain how it looked, and what it is.  Paradise Gardens is an ode to joy.  It is gleeful in celebrating details.  It is evidence of a life lived.

The Reverend Howard Finster was a self-taught folk artist.  He never went to art school, in fact never went past grade school.  His enthuasiasms ran far and wide; he had strong feelings for Coca Cola, Elvis, George Washington, and God, and memorialized them frequently in his artwork. 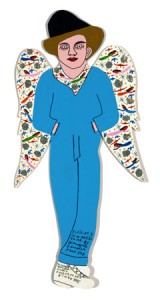 He began receiving visions and making artwork based on them and was in fact making art right up until he died in 2001.  His grandson, who was overseeing Paradise Gardens on the day I visited this summer, was kind enough to tell me that Howard died peacefully in his sleep.

He numbered each piece (he made about 50,000) and often included a written message or testimony of some kind as well.  I have an original Howard Finster painting which I treasure, and he painted and wrote on both sides of it.

The thing I love about Howard is that everything was worthy of being looked at and engaged with.  A better word for it is “Loved”.  He transformed his property into Paradise Gardens by seeing beauty in every detail and deciding to memorialize it.  He essentially painted everything that didn’t move:  the sides of the house, the cars in the carport, pieces of wood or rock lying around.  Other items–old brooches, pictures, toys, tools, broken pieces of glass and mirror–were set in concrete in beautiful patterns or grouped by theme and used to pave walkways all through his backyard.  If they weren’t put on the ground in a walkway, they were built up into a tower of some kind.  He liked towers and spires.  Many of the walkways and other art have been removed and placed in the the High Museum of Art‘s permanent collection, in order to save them from exposure to the humid Georgia weather. 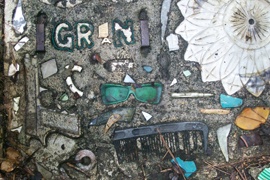 My favorite walkway involved all kinds of old rusty tools, arranged in patterns and facing off with each other in a nice little themed composition that you stepped on as you strolled among the artwork and shade.  You can see a bullet in this one, but another favorite (also gone) involved antique pistols set into concrete, facing each other and forever dueling.  I recall a bust of Abraham Lincoln in that panel too; an ode to the Civil War.

Nothing escaped his gaze or desire to show it off.  A dentist (whom he thoughtfully and duly credited by name) sent him old plaster molds of bites and jaws and implants; Howard made bas-reliefs out of them, and plaques which he inscribed and hung around the grounds.

He gratefully received anything and everything that people wanted to give him:  the teeth, jars of what seem to be beans which are now impounded in a concrete wall, commemorative plates from the gift shop of a certain university in Pennsylvania.  And then he made something out of it, often a tower, or an adorned pile of concrete that reached toward the sky.

Even his garbage was seen as a gift, and worthy of being commemorated for posterity.  There are several gazebo-like glass-enclosed structures which showcase some of his collections.  My very favorite featured dozens of pencil stubs that were too small to be held in the hand any longer, hundreds of squeezed-out tubes of paint along with dozens of gallon paint cans (for good measure), brushes that had no bristles or damaged bristles or caked-together dried-out bristles.  Broken tools.  Dented aerosol cans.  Items covered in paint that were no longer able to serve their original purpose.  Basically anything you can think of that could have been used to make a piece of artwork and gave up its life in the service of that goal.  He saved all of these things, arranged them around the inside of the gazebo, and attached them with staples, glue, hung them with string or otherwise put them on display so that they could be admired from outside, through the glass.  All along the top of the structure, on the support beams, Howard painted  “40 YEARS OF WORE OUT ART MATERIALS”.  It was gorgeous.  That’s a guy who works hard and admires what he’s done.  He used every one of those things down to the nub.  And when they couldn’t be used anymore, he made more art with them. 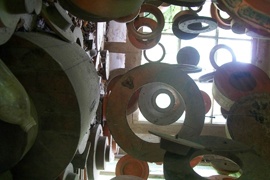 The gazebo of round things

It’s usually a surprise to look inside anything in Paradise Gardens–more beautiful than you were ready for.

Here’s another gazebo that’s beautiful in its simplicity.  Everything round, and shapes playing off each other and reflecting the sunlight.

The Bottle Chapel is a new favorite of mine.  Each bottle has a few marbles in it and looks like magic when the light comes through. 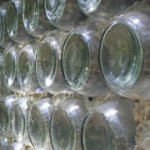 Bottle Chapel, from the outside

The group REM, who are from Georgia, made a music video in Finster’s backyard:  Radio Free Europe, by REM .  That was in about 1983 and you can really get an idea of the density of the backyard, and the sense of exploration and imagination needed to walk around.  The old days…

I wanted to come back and show my niece and nephew, who live in Georgia and who are both collectors and creators.  I remembered feeling exhilarated and charmed ten years ago, walking through his sacred space and seeing the connections he made between strange ideas and shapes, and feeling how happy and joyful he was in linking all those 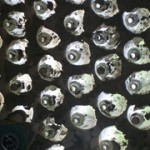 Bottle Chapel, from the inside

things together.  It is a space that’s filled with love and imagination and curiosity, and I wanted them to feel that too and remember what it feels like.  And to remember it even after they grow up.  It was a good time for me to be reminded too.

My nephew, who is five, and I gazed quietly into a dark barn that was piled high with tools, various items, boards, etc etc–what might be junk to many people, but was once lovingly donated or collected,  and are still patiently waiting their turn to be transformed into something unexpected and beautiful.

My nephew said “It’s so sad”.  A pause.  “All those art materials and he never got to use them”.  That was exactly what I was thinking.  But it’s not a sad place by any means.  It’s a place where everything is appreciated, celebrated, and loved– every last one of those things.

It really has to be seen to be believed. 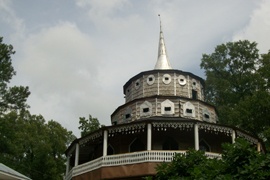