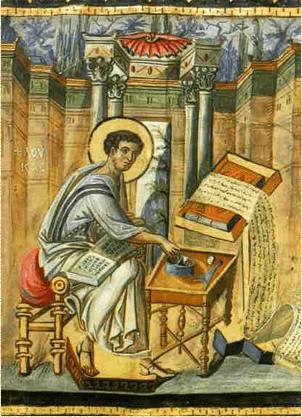 I’m wondering how it is that I’m just now discovering that St. Luke is the patron saint of painters…

I knew that St. Clare is the patron saint of TV. Oh yes, even though she lived in the 12th century. She supposedly saw images on the wall when she was sick, and heard things too, so was linked to, and declared the patron saint of, the new media in 1958.

And I’d heard the one about St. Joseph being the patron saint of real estate. If you don’t believe me on that one, then just bury a statue of him upside-down in the backyard when you want to sell your house and see what happens.

But now, something useful to my daily life!

St. Luke was supposedly the first icon painter, painting one of the Virgin Mary, as well as portraits of Peter and Paul.

But Luke was also the patron saint of doctors. The connection there is that in Renaissance Italy, painters and doctors belonged to the same Guild. Painters bought their pigments from apothecaries, where doctors bought medicinal ingredients. In comparison, sculptors were members of an entirely separate guild, the Masters of Stone and Wood, and have a different patron saint, St. Claude.

I may need a little statue to put on my easel, overlooking my paintings. Fun with Catholic culture!