Portrait of the Building as a Young Building 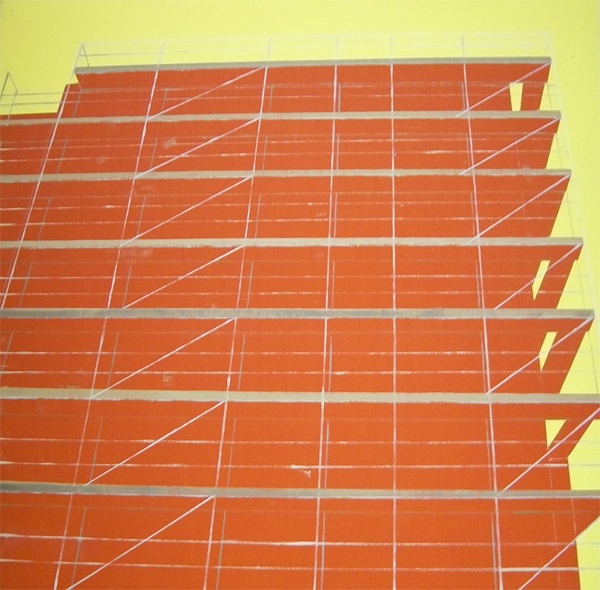 Tram Bui arrived in Seattle in 1999 to study art at the University of Washington, and like many grad students, she needed an inexpensive way to decorate her apartment. She decided to paint herself a cityscape of Seattle, but her attention kept being distracted by the construction site in front of her window instead.

She embarked on a series of paintings of buildings under construction, seen from below as they rose up in the Seattle sky, covered in scaffolding. Construction sites are busy places, but the paintings are simple, with either two or, at most, three colors. The buildings themselves are seen in silhouette, as just a shape against the sky.

Interestingly, while she used to paint interior scenes, she now became interested in exteriors. She paints the skeleton that will someday contain the interiors, the lone building that will augment the cityscape.

And these are lone buildings. There is no neighboring architecture, or glimpse of city life. No sidewalk, only sky. Like the building, the sky is also painted in a flat monochrome. There may be a third color devoted to lines which indicate the scaffolding running across the face of the construction site.

It’s these lines that give the viewer a sense of what’s happening in the painting, because without these fairly minimal details, the painting would be abstract with two flat colors. Just a little bit of an angle, to show a line turning a corner and receding into the distance, gives us the volume of this building and lets our eye understand it’s not flat after all.

In fact, the buildings are so specific that they are portraits. Bui works from photos and titles them by their location. They are also mini-construction projects themselves: the supports are not stretched canvas, but wooden panels that are about 3 inches deep. The paintings are structurally sound, like objects or walls in their own right. Up close, you can even see the precise lines Bui has created between building and sky, where she masked off areas with tape and then pulled it away, leaving a slightly three-dimensional edge.

The paintings eventually grew in size, from 8 x 10 inches, to 4 feet by 5 feet. Bui enjoys the feeling of climbing a ladder to paint, saying it feels like she’s really building something. She would love to make a life-size building portrait.