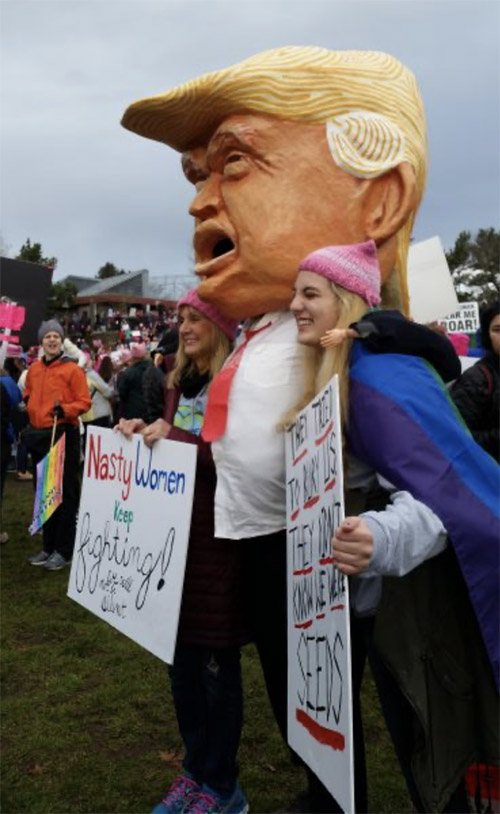 I ran across this photo on my phone recently, taken at the Women’s March in Seattle in January 2017. So much that I could say, but I feel that others are saying it better than I can, so I’ll stick to the role of art – and its power – here.

When I first saw this giant puppet, my first instinct was to laugh. Second was to admire the craft (it’s very well done in terms of likeness, but also technical ability, and lastly, standing up to the Pacific Northwest weather). From a little remove, I can also appreciate its place in a long line of protest art.

This will be an abbreviated, overly simplified commentary, but here goes. Puppeteers have always been able to comment more freely on social matters because they moved around. They usually took their show on the road, and so were able to comment more or less as outsiders (and I suppose, if the heat got turned up, they could leave town pretty quickly!). Puppetry was (and is) fairly low on the totem pole of the art world (patrons and curators are rare, for example, and there is no money in it), so puppeteers weren’t dependent on keeping powers-that-be happy, or romancing wealthy collectors. Part of the entertainment is a sort of brash, anything-goes schtick that seeks out laughs based on crude jokes and physical humor…we see and expect this with the Muppets, say, and can see how this easily translates to commenting on dirty goings-on in local government.

Anyway, the best education on puppets has to be at the Bread and Puppet Museum in Vermont. NYC sanitation workers to Latin American despots are proudly represented, from a protest stance, to the left of many.

But back to the idea of power…can you imagine how this puppet would get right under the Donald’s skin?! That’s power! A picture is worth a thousand tweets!