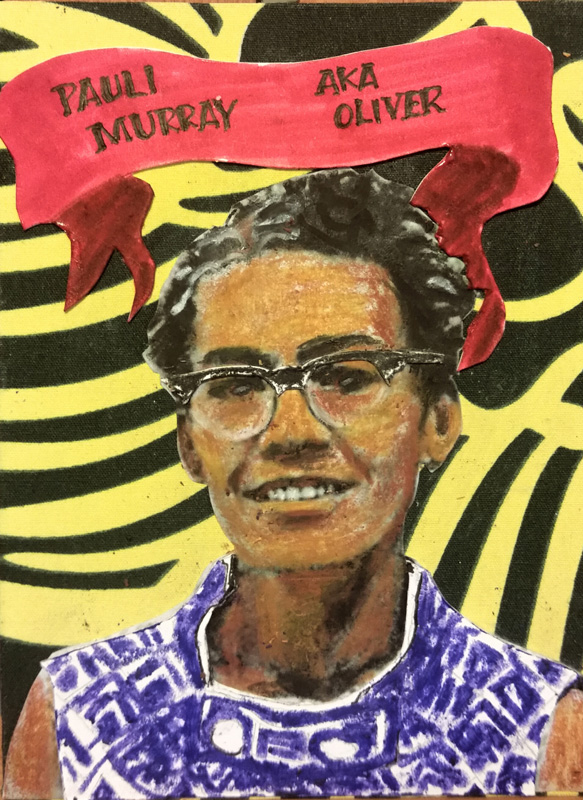 In honor of Pride Month, I’m doing a painting every day to honor an important queer person or moment.

First up is Pauli Murray. It’s hard to know what accomplishment to start with. She was a co-founder of the National Organization for Women. She was a legal scholar who was credited as co-author in a brief by Ruth Bader Ginsburg because of her groundbreaking work on applying the Equal Protection Clause to sex discrimination*. She was arrested in 1940 (15 years before Rosa Parks) for refusing to give up her seat on a segregated Virginia bus; the name she gave to the police was Oliver**. She attended my alma mater, UC Berkeley***. Later in life, she became the first African American woman to be ordained by the Episcopal Church, and was posthumously sainted. She also wrote and published poetry.

In short, she was a real bad-ass.

* This co-authorship credit is a clever and gracious way to acknowledge the work of legal scholars of Color, who weren’t allowed to climb to the heights attained by White lawyers like RBG. Not only did the White lawyers reach positions of greater power, but they could do so using legal arguments that piggybacked on the work of these scholars of Color. Kudos to RBG for sharing the credit that is due to Pauli Murray.

** It was this queer moment that prevented Pauli/Oliver from becoming the face of the Civil Rights movement for Blacks; leaders of the movement didn’t want her queer identity to take any focus away from the Black struggle. The movement waited another 15 years for Rosa Parks (a married woman, and by all accounts, model citizen) to come along before addressing bus segregation in this specific way.