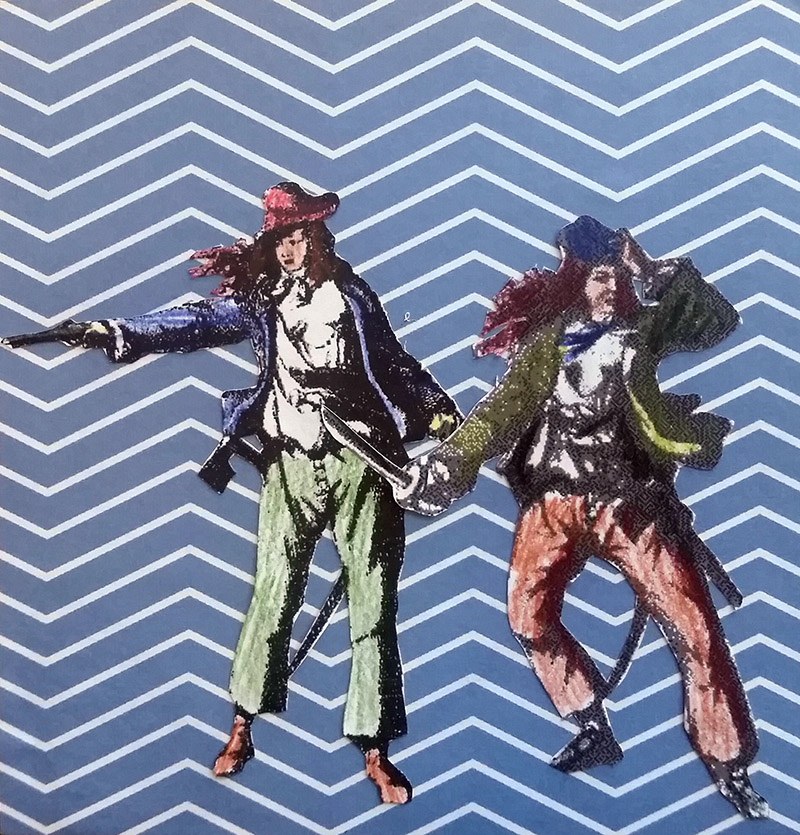 Although some accounts differ and some have been clearly “straightened up”, there is enough evidence to count Anne Bonney and Mary Read as Lesbian Pirates, who not only established reputations as among the toughest of the rough-and-tumble pirates on the high seas, but were a couple as well.

Anne was known in her hometown of Charleston, circa 1710, as a rowdy tomboy with short hair. After a series of infamous incidents involving taverns, swords, and beating a would-be suitor with a chair, she eloped and her father disinherited her. She soon left her husband and took off for the Bahamas where pirates, homosexuals, and ne’er-do-wells headquartered. Told that she needed a man for protection, she linked herself with a man and his mistress, then with Calico Jack (part inspiration for Johnny Depp’s character in Pirates of the Caribbean) who was so named because of his flamboyant patterned dress and was suspected of being gay. Was this the first bearded relationship among pirates??

Anne plotted many pirate takedowns of other ships, and also of men who paid her too much attention. She eventually felt that she didn’t need Calico Jack for protection, and threw him out of the captain’s quarters so that she could live there alone.

As for Mary Read, her mother dressed her in boys’ clothes and called her “Mark” so that she could inherit family money (something girls weren’t allowed to do in England at that time). Her mother disowned Mary when she realized that Mary actually preferred being Mark. Mary ended up in the Bahamas, having been a footboy, then a soldier, then a sailor, then captured by pirates and finally persuaded to join their crew (as Mark). This is where she met Anne, and they were joined at the hip, living together in the captain’s quarters. As time went by, Calico Jack either became jealous (I’m not so sure) or wanted an upgrade to his living arrangement and burst in on the master suite. He found the two pirates in bed, with an undressed Anne poised over the undressed and obviously female “Mark”. This is where the story gets “straightened up” because many historians maintain that Anne had believed she was about to go to bed with “Mark”, discovering Mary’s true identity at exactly the same moment as Calico Jack. This is completely ridiculous, given how intimately they’d been living, but it’s in keeping with a straight narrative that would rather portray Anne as a loose woman with lots of male suitors rather than a self-possessed lesbian in control of her sexuality.

At some point, Mary goes back to her real name and the two women infamously conduct many raids together. Once, Mary kills an ex-lover of Anne’s out of jealousy. They’re eventually caught, tried, and sentenced to hang. They escape execution by claiming they’re pregnant (highly unlikely, but a common – and successful – plea for women at that time), but Mary dies in prison. Anne disappears from history at this point, though claims that she married and returned to Charleston or became a nun sound like more “straightening up” to me.