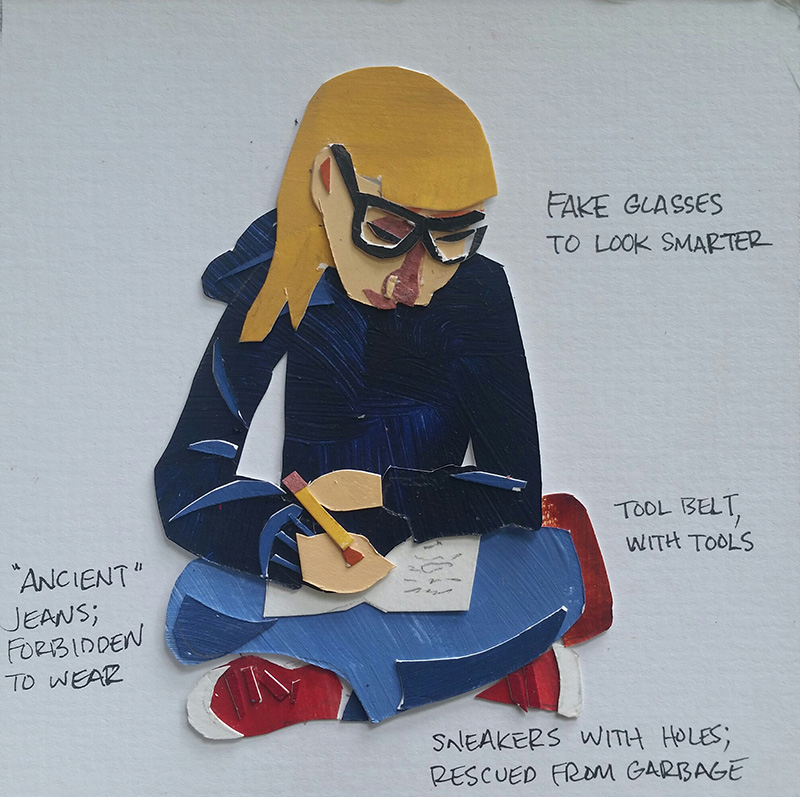 We enter our second week of Pride Month, and continue celebrating a queer person or moment every day with a new painting.

Today we honor Louise Fitzhugh, creator of Harriet the Spy. Fitzhugh was queer, though not too much is known about her, and she died at the young age of 46. Writing Harriet was her biggest success, and that’s what I really want to talk about anyway.

I’ve read the book dozens of times, and continue to pick it up every once in a while, even now. It never disappoints and is always laugh-out-loud funny. This is a book that I’ve bought for others, read aloud to little kids, had to buy again and again because a loan to someone else became permanent. I can’t say that about any other book I’ve ever had.

Harriet is a touchstone for kids who were different: she fights with her parents, gets into trouble at school, and spies on neighbors in their own homes. She’s quirky and stubborn. She’s especially appealing to a certain kind of independent-minded girl, tomboys and baby dykes, and I loved Harriet, even if I couldn’t put my finger on those reasons why. I liked that she fishes old clothes out of the garbage after her mom throws them away. I liked that she has another life, a “career” as she calls it, as an after-school spy. This is a very active life, and while she adores quiet activities like reading and writing, much of the book takes place out and about in New York City, where she shows off her savvy street smarts. She thinks nothing of climbing fences, hauling herself up and down in a dumbwaiter, and pretending to play ball while furiously eavesdropping. She makes her own tool belt (Home Depot lesbians, I’m talkin’ to you!). She wears fake glasses because she thinks they made her look smarter. Can anyone imagine a child wanting to wear glasses? (Needing glasses for me felt like a death sentence, and I still mostly wear contacts). Can anyone imagine a smart girl who wants to look even smarter? (Besides Hillary Clinton, and the Interwebs are full of articles about how she’s paid the price for that). Well, good for Harriet, and good for Hillary! My mom coached me to not act too smart (because of boys and blah blah), and I think that’s the world that Harriet comes from.

Speaking of moms, Harriet pretty clearly rejects what makes her mom, and her friends’ moms, tick, in both big and small ways. She observes in her ever-present notebook things like: “I once saw my mother in a mud mask. They’ll never get ME in a mud mask”. (I love the “they”. She refers to “them” frequently. As a kid, I took this to mean all the grown-ups, but now I think it means the hetero-normative world. They’ll never get her in a mud mask, indeed). None of the moms in the book have a career, but Harriet has had one for years. She’s a striver, and insists that she won’t grow up to drink tea and play bridge like the adults she sees around her who are on cruise-control. This ambition, and her brashness, her intelligence and her physical quickness, her independence…all of these were magical traits to me. Interestingly, they’re all considered masculine traits. To me, and lots of other girls, Harriet was a different kind of girl, different in lots of ways, certainly, but in a specific lesbian way that we identified with, even if (like me) I couldn’t put my finger on why I felt such a kinship with her. That kinship is important, and I suspect it brought a lot of girls through some rough passages.

Final personal note: Harriet lived in Yorkville, a subset of the Upper East Side, where I lived also for some time. I thought of her whenever I was in Carl Schurz Park, and I “know” which house is hers.