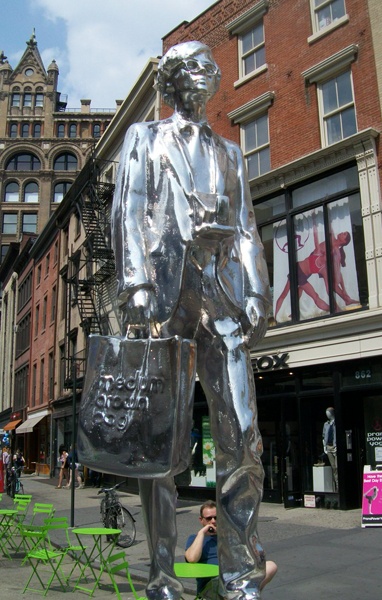 The Andy Monument by Rob Pruitt/Photo by Maura McGurk

New Yorkers always tend to look down as they speed around town, probably to avoid stepping in anything nasty.  But there’s lots to see when you keep your eyes above street level.  This sculpture of Andy Warhol, by Rob Pruitt, is located at the northwest corner of Union Square Park, outside of the building where his Factory was housed and where he gave away copies of his Interview magazine.  The statue wears Levi’s 501 jeans and carries a Bloomingdale’s medium brown bag; as the single most famous Pop artist, Andy would have been proud of so many pop references.

Pruitt’s statement on The Andy Monument is also worth noting:

Like so many other artists and performers, and people who don’t fit in because they’re gay or otherwise different, Andy moved here to become who he was, to fulfill his dreams, and make it big. He still represents that courage and that possibility. That’s why I came to New York, and that’s what my Andy Monument is about.

The Andy Monument is on view until October 2–worth checking out.