Published in The Lavender Review

I’m very happy to be part of the latest issue of The Lavender Review, an art and poetry journal by and for lesbians. I’m in great company, alongside artists and writers such as Leonard and Virginia Woolf, Man Ray, Romaine Brooks, Artemisia Gentilleschi, Berenice Abbott, and the wonderful Hannah Barrett, whose digital collages inspired me to try my hand at them. How cool that one of them ends up in the same journal as one of her paintings.

This issue’s theme is Gender, and was inspired by an episode of the web series F to 7th, which you can watch here. In fact, Lavender Review’s entire YouTube channel is excellent, so I recommend sitting down with a cup of coffee or something stronger, and browsing the issue and videos.

The video has a funny exchange when the earnest Park Slope heterosexual (as she refers to herself) interviewer doesn’t understand what her lesbian interviewee means by “masculine and feminine”. She reduces it to “man and woman”, then tries “boy and girl”, and finally pretends to understand with a “yeah, yeah” as she looks away from the camera. 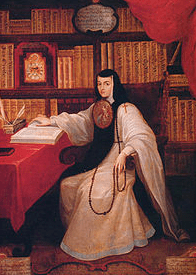 Although most of the decisions I made as I worked were more or less subconscious, I’m taking this opportunity to deconstruct my creative process a bit. This particular collage was inspired by lesbian pulp fiction book covers and the 17th century feminist nun Sor Juana Ines de la Cruz. Sor Juana is beloved in Mexico, as the first true New Spanish (Mexican) author. She wrote some love poetry which referenced women, but this aspect of her work is often neglected in school in favor of her expository writing. Maybe this is why she is able to be celebrated on Mexican currency (also featured in the collage). She learned to read in her grandfather’s library, and asked her parents if she could disguise herself as a boy in order to attend college. They refused, so she entered the convent, the only place a woman could receive an education. Her desire to abandon one gender in favor of another was on my mind, but whether that was simply an expediency to get an education, as some have suggested, or something more, is a nuance that’s been lost to history.

For me, like many gay, collapsed Catholics, I prefer campy nuns to any other kind. A convent seems to me like the gayest place in the world–all those women–make that, all those women rapping each others’ naughty hands with rulers and making out after vespers. So I used the idea of lusty nuns looking at each other in the convent.

This feels like shaky ground to me, even as the creator, because I’m not quite comfortable with the idea of taking over the (male) gaze. It doesn’t feel right, as someone who doesn’t enjoy being watched, to put someone else in that position either. Since the nearly naked body was taken from lesbian pulp fiction, it can be assumed that there was a rebellion, and maybe even a joy, in flaunting oneself like that for another woman, so maybe I shouldn’t feel so bad. Either way, I gave her big eyes so that she can watch others (a traditionally male pursuit) while she’s being watched (traditionally feminine).

Then, to amuse myself a little more, I gave this feminine character a red velvet stole, suggesting the object of Sor Juana’s affections, who was a countess and vicereine of New Spain. For a contemporary take, I also used red hair taken from a publicity photo of Julianne Moore.