365 Days of Art: March 3 – Reconstruction of Dynamited Buddhas Is Discussed 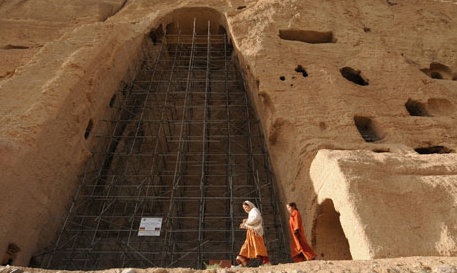 Ten years and one day after the Taliban initiated their destruction, UNESCO convened a conference to discuss possible restoration of two 6th century Buddha statues.

One result of the conference was a list of 39 recommendations for the site in Bamiyan, Afghanistan where two large niches in the side of the cliff have stood empty since the artwork they housed was dynamited away. The recommendations included leaving the larger niche empty as a testament to the destruction of the Buddhas, a study into rebuilding the smaller Buddha, and the construction of one or more museums on or near the site.

Work has since begun on restoring the Buddhas using the process of anastylosis, where pieces from the original sculpture are combined with modern material. Bert Praxenthaler, a German art historian and sculptor involved in the restoration, has estimated that it’s possible to reconstruct about half of the Buddha from its rubble. This is no small project: the Buddhas were about 100 and 175 feet tall, respectively, and some rubble is the size of tennis balls.

The project, organized by UNESCO and the International Council on Monuments and Sites, seeks to train and employ local Afghans as stone carvers, and eventually in other capacities as tourism is drawn to the area. The project has been criticized for different reasons. There are some who believe that the empty niches are historic in their own right and should be left as examples of the destruction caused by the Taliban, while others believe that money should go to housing and electricity in the region instead.