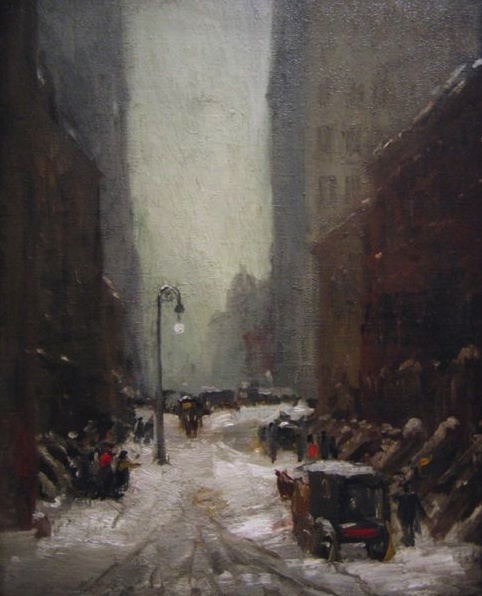 I recently made a presentation to docents at the Tacoma Art Museum about Robert Henri. I thought it would be easy, since his The Art Spirit, a compilation of charismatic lectures to his students, propelled me through many of my painting classes in college.

The first thing I learned is that I’ve been pronouncing his name wrong all these years! It’s not French; it’s pronounced HEN-rye. Silly me. He was born in Cincinnati as Robert Henry Cozad, but after his father killed a local rancher in a land dispute, the scandal caused the family to move, and each to adopt different surnames.

Henri studied in Philadephia and Paris. In Philadelphia, he met and formed a strong bond with a group of other artists, most notably William Glackens, John Sloan, and George Luks. The slightly older Henri gave the others homework assignments, and encouraged a departure from polished, Academy-style art. He promoted an art with a distinctly American outlook, one that would stand in contrast to Impressionism. Just after the turn of the 20th century, that meant the city and all its grit.

New York City was a muse. This turn toward urban realism, based on direct observation, coincided with a similar development in American writing; novelists such as Upton Sinclair (The Jungle) and journalists used urban slums as their subjects. These unpolished, active subjects inspired a faster painting approach, and not surprisingly, were consistently rejected from juried exhibitions. In response, a group of artists held the first American non-juried show. They, and others working with similar themes, were called “apostles of ugliness” and eventually better-known as the Ashcan School, though that name wasn’t coined until the 1930s.

A great quote from The Art Spirit:

“I am quite sure that many a gold chair has been hauled in because the artist has failed to get distinction and richness in the mien of the sitter, and he counts on the chair to supply the deficiency. But a cocked hat won’t make a general.”

Fun fact: Henri is a distant cousin of Mary Cassatt.