Behind the Scenes, Part 2 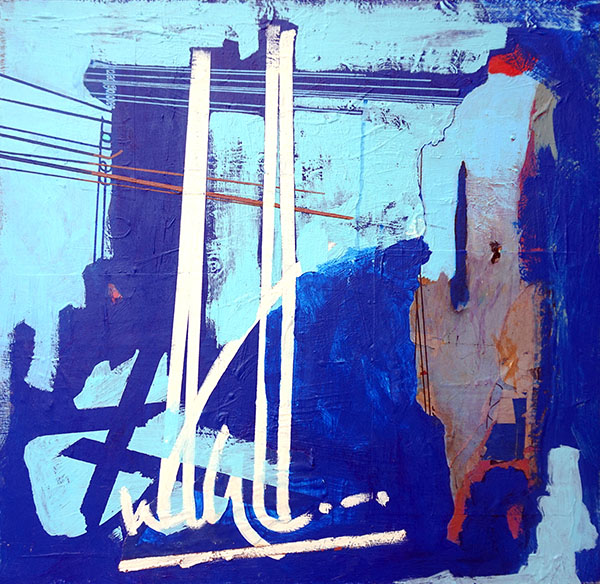 In an earlier incarnation, this painting looked much different. In the exhibition where that original version was shown, someone started a conversation with me about pattern in my work. Specifically, he said that he noticed that I used a lot of pattern, but that I always cover it up with fields of plain color. He asked me why I did that, and I didn’t have an answer because I hadn’t even thought of it that way myself. From that conversation, I challenged myself to consciously use pattern, and to resist what I now know is my temptation to bury it. This has led to some interesting developments for me, and a new (to me), labor-intensive way of deliberately creating patterns, such as stripes. I’ve used a lot of tape in the process, laying it down, painting stripes, blow-drying them, removing the tape, and starting again with the next stripe.

This mindfulness, and taking pains with details, came at a time where my wife and I suddenly woke to the fact that, Hey, we’ve been together a while now; this is now what you’d call a long-term relationship! We’re not honeymooners any more. Time has a way of creeping up like that.

Also around this time, we took a long vacation, the first since our honeymoon. Among our stops, we revisited Italy, where we had gone together in the very early days of our relationship. Going there again provided a natural comparison and opportunity to look at our relationship at its beginning and at its current bloom, seven years in.

As an artist also, there was an irresistible comparison to revisit old themes, since Italy had provided me with such inspiration for my work a few years ago. I’ve started working with Italian wall posters again, as well as other found objects. Bruce Springsteen and many others have revisited past material and made it fresh again, for example, rearranging Born to Run, a song he wrote at age 23, to reflect a mid-life perspective, or touring this year solely on the back of an album, The River, that he wrote and released about 35 years ago. There is the possibility for an increased richness of perspective and self-knowledge and of course – better work! Which is really what us artists are after all along.

So these are the thoughts that are influencing my work right now. For this painting specifically, I was also thinking about some experiences in Morocco. The blue and white color palette, as well as the suggestion of Arabic writing evoke a little of the visuals of Tangier, where we spent a couple of days.

Being gay is illegal in Morocco, and there is an active effort, in some locales more than others, to bring gays to “justice”. That justice is especially harsh. I wasn’t concerned to travel to Morocco, as I’d had quite a bit of experience in the Middle East, and we were going to Tangier, a major city located within sight of Spain. The sophistication of a big city and its familiarity with Europeans made me feel completely comfortable, and we can “pass” as straight when needed. (I very rarely choose to do that, but sometimes it’s safer).

On top of this dynamic, in the airport when we left, I was pulled aside for an additional, private inspection by a female security agent. This never happens to me, so it was notable. It became even more notable when this particular inspection made up for the previous lack of attention. I’m tempted to be modest, or mince words, but I’ll say that it was a very physical inspection. She took me to an office and closed the door. Although the walls didn’t meet the ceiling, so there was some audible connection with the outer room, we were completely alone. The agent spent a lot of time focused on inspecting my breasts, both over and under my shirt. She devoted most of her time, though, to vigorously rubbing my upper thighs, especially between my legs.

When I tell the story in person, I make it sound very funny and act it out with some degree of abandon. I act it out because most people don’t believe it until I do. I add the “abandon” because if I don’t make it funny, it’s terrifying. I say that she was cute, and all she had to do was ask. And I really did thank her in Arabic, as she was letting me go. But my funny version completely minimizes the underlying terror of it, because when you’re gay in a time and place where it’s illegal to be, you don’t have any power. I made the conscious decision to not object in any way to any part of the inspection, because I had my own fears about what would happen if I had. If I had suggested that the inspector was somehow wrong, or had gone too far, I’d be making a public declaration. By saying I was uncomfortable, I’d be saying that there was something inherently sexual in what had happened. Because we were both women, that would make it illegal. If I put her back up against that hypothetical wall, her only defense would be to lash out. And if she lashed at me, she’d hit her mark, because after all, I really am gay, and my wife was standing just outside the door to prove it. Suddenly, or in my mind anyway, we’d both be going to jail, while the inspector fills out paperwork and makes jokes about me in the backroom. No thank you.

Would any of this have occurred to a straight woman? Was I singled out because the agent thought I was gay? Who knows.

Then, one day while I was listening to classical music in the car, I heard the title of a piece, which was Algerian Overture. [Lately, I’ve been enjoying this fun game that I play with myself, which is that I get ideas for paintings from mis-hearing the titles of classical pieces. My favorite is that I heard Music of 10,000 Fernandas, which had so many possibilities to a lesbian, but when I checked the playlist later, I realized that they’d said “Music from Antonio Fernandez”, the classical guitar player. Which I can’t help but think isn’t nearly as interesting]. Although I’d heard Algerian Overture correctly, I knew then that I’d found my title if I just changed it to “Tangier”.