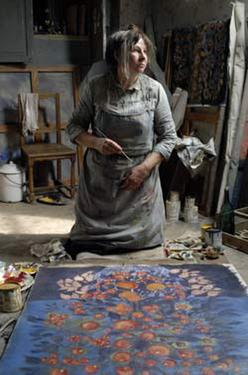 I watched a movie the other day which keeps percolating at the back of my mind…Séraphine.

She was a woman who worked very hard at manual labor during the day and painted beautiful pictures at night–sometimes all night.  She had dirty hands and fingernails because she used them as painting tools.  She worked on the floor; sometimes she slept there.  I found it charming that, because she didn’t want to be disturbed while working, she hung a little sign from her doorknob which said “Séraphine is not accepting visitors”.

She scraped together coins to buy supplies at the local store, and was scorned by the shopkeeper whenever she came in (“You’d be better off buying coal for winter”).  She rarely complained but admitted that cleaning took all of her time, time which she wanted to spend painting.

Séraphine was eccentric too:  she climbed and hugged trees and made her own “energy wine”.  She also made all of her paints by hand and, though no one knows her recipes (the movie claims that she used blood which she took from meat in the kitchen, candle wax from a shrine at church, and ground pigment from natural sources like leaves).   She sang while she worked.  The sound of her almost tuneless singing is beautiful–not in any conventional or melodious sense, but because it’s the expression of a soul at peace.

Oh, are we moved by the same spirit…the desire to turn off my cellphone so I can’t be found when I’m working…lamenting that my job takes me away from my real work…the slighting comments that every artist hears but has to tune out…the persistence of always going back to the studio even if tired or poor or depleted…the hard work of working…the joy of working…

Being an artist is still the same at heart.

The movie also shows Séraphine’s friendship with Wilhelm Uhde, a German art critic who was the first person to recognize Picasso’s talent and buy one of his paintings.  (He is also known as the first to buy a Braque painting, and as the “discoverer” of Rousseau).

I appreciated this unconventional side to her:  how difficult it must have been, as a single woman in a small town in the early 20th century, to befriend a single man without scandal, especially since he was renting one of the houses which she was hired to clean.  On top of that, Uhde was sophisticated enough in his tastes and dress to stand out as a city-dweller in the French countryside.  Also, he was German:  everyone remarked on his accent; anti-German sentiment was high at that time (just before the outbreak of WW1), and in fact he was forced to flee France in the middle of the night when war did break out.   He was also gay.  There was nothing there that would have suggested a friendship might develop between these two, though they certainly had art and their outsider status in common.

Séraphine’s art was lush and nature-inspired but she admitted that it sometimes scared her.  The leaves, flowers, and fruits are full of an insistent energy and they sprawl all over the canvas.  Rather than being caught in a moment in time, they grow and move.  They look like eyeballs and mouths, looking, breathing, living, demanding attention, seething, threatening to go wild. 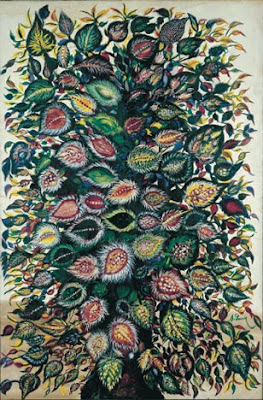 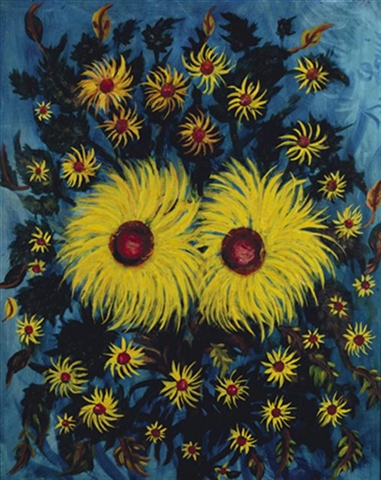 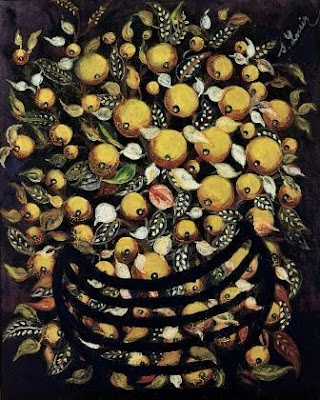 There is beautiful cinematography in the film too:  a striking shot of a black wrought-iron chair set against the snow.  A night-time landscape that was so still and muted that it appeared to be an artwork; I thought it was an image of a dark, softly smudged charcoal drawing…until Séraphine walked into the frame and I realized it was a dimly lit street at night.

The shot at the end of the leafy tree alone on the hill, the slightly tilting trunk balanced by the chair Seraphine placed under it.

This is a meditative movie.  It’s quiet and persistent, though not simple.  Seraphine’s relationship with Uhde, her friend and patron, is complicated:  they lose touch during the war but are reunited when he returns to France, sees her work exhibited at a local show and seeks her out.  He provides her with a monthly income and supplies so that she can paint, but cuts her off when she spends the money frivolously at the same time the financial market crashes.  She is eventually confined to an asylum and gives up painting.  He upgrades her to a private room there, and pays for it, affording her some dignity in the warehouse of decay and inhumanity which those places were in the 1930s-1940s.

Though she’s no longer painting, Uhde is active in showing her work during this period.  He is told not to visit, that thoughts of her old artistic life will be further upsetting to her mental health.  In his autobiography, he states that she died some eight years before her real death…out of guilt?  In trying to preserve a sense of dignity for her, “ending” her life before her asylum years?  Obliquely stating that if not allowed to create, the artist is dead anyway?

A nice meditation on an artist’s persistence in the face of all the things that tend to conspire to get in the way of pursuing your work:  life circumstances, people who at best may not understand or at worst will hate and mock, the race against time.  As well as the things that can build you up:  someone who understands you and your work, the need to make it, the joy in simply working.