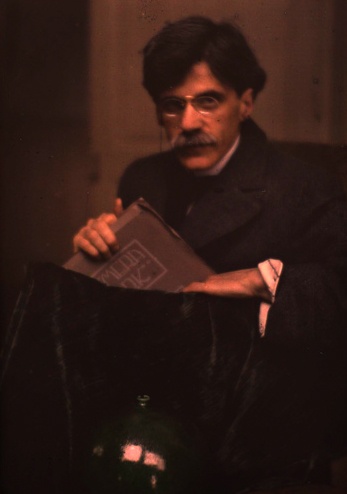 January 30, 2011
A special five-day exhibition of never-before-exhibited autochrome photographs, using low-oxygen enclosures to keep them from fading, closes at the Metropolitan Museum of Art.

Some background: what are autochromes? They’re photos made from a process that was developed in the early 20th century, transparent color images on glass that must be viewed either with a transmitted light source or by projection in a specific device. The image is made up of a silver gelatin layer, like that used in the black-and-white photography of the time, together with a color screen of minuscule potato starch grains on the glass. The potato starch grains are dyed red, green, and blue and filter the light during image capture, producing delicate color effects. The dyes used to tint the potato starch grains fade rapidly and irreversibly when exposed to light, either in the environment, or in the projection system that’s necessary to view them. This led to the Met’s policy of not exhibiting these vulnerable photographs at all.

Recent research in art conservation shows that low-oxygen environments can slow or stop deterioration of some art objects. For example, the Declaration of Independence is now displayed in a low-oxygen (anoxic) case. After experimentation with this idea, the Met displayed the photos with an anoxic case around the glass plates, for five days only.

What a treat for the art world. In this country, Edward Steichen and Alfred Stieglitz (heavy hitters in the world of photography) were enthusiastic proponents of autochromes when the process was developed in 1907. But, this enthusiasm had a short life, and by 1910, photographers were moving on to other processes that were easier to create, handle and display. I wonder how many autochromes have been lost over the years, just by being looked at.

Here’s a very readable, illustrated, and more in-depth discussion of the autochrome process.