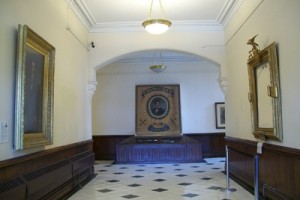 The empty frame on the right, where Lincoln's portrait used to hang in Norwich City Hall

In 1994, City Hall in Norwich, Connecticut was the scene of an art heist. A portrait of Abraham Lincoln, painted by John Denison Crocker, which had hung there for almost 130 years, was cut out of its frame and stolen, never to be publicly seen since.

The City of Norwich still has a special feeling of pride for the portrait, so much so that it applied for a grant which has allowed City officials to sponsor a contest to replace the painting. The City has essentially commissioned a copy of the work, which will be culled from contest entries, and plans to install the copy in the old frame, which still hangs in City Hall, an empty reminder of the loss.

The reasons that the civic pride for this artwork runs so deep are that the painting commemorates a visit which Lincoln paid to Norwich when he was a Presidential candidate in 1860, and also because the artist was a locally famous painter who lived most of his life in Norwich. 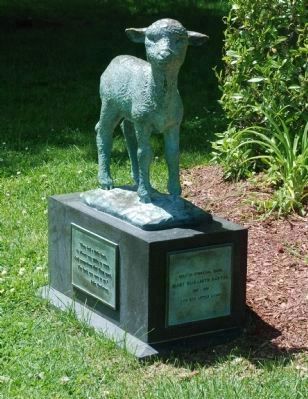 The replacement statue is bigger and heavier, presumably to prevent another theft.

I understand what it’s like to have an important town landmark stolen. Sterling, Massachusetts, the town where I went to elementary school, was the birthplace of Mary Sawyer, better known as the girl from “Mary Had a Little Lamb”. In honor of Mary and her lamb, a statue of a lamb stood on the town green. It’s difficult to overestimate the amount of civic pride attached to that statue; probably everyone in town had had their photo taken in front of it at some point.

Years later, when I was in college, I read in the San Francisco Chronicle that the lamb had been stolen, and I still remember the shock as I read the article. Shock that our little lamb had made the papers in California, but also: Who would do that? (It actually turned out to be one of our former neighbors).

I imagine that the people of Norwich feel similarly about their Lincoln portrait, because it represents a historical connection to our 16th President, as well as pride for native son John Denison Crocker. Because I understand the pride that a town can have for a local hero and the way that pride can be held in a symbol–like a statue or a painting–I want to replace the Lincoln portrait.