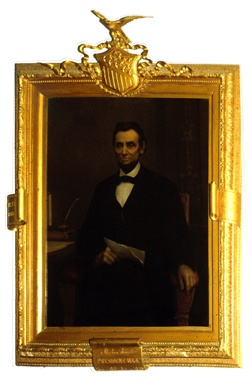 This isn’t about Lincoln’s assassination. (For that, The Conspirator movie which comes out this week looks pretty good).


This is about the theft of a portrait of Lincoln, painted by John Denison Crocker, which hung in City Hall in Norwich, Connecticut for almost 130 years until it was stolen in 1994.

The thief cut it out of the frame, right off the wall, and presumably walked out the front door and into the street, never to be discovered.

The front entrance of City Hall faces a busy traffic rotary, several other businesses and City buildings, multiple residences, and a small park area. There was no hope of being completely unseen, so I imagine the thief took a moment to roll the large canvas and tuck it under his arm, purposefully walking out of City Hall as if they were architectural plans and he had every right to be carrying them.

Now, almost 20 years later, the police re-opened the case, at the same time as the Slater Museum sponsored a contest to replace this symbol of town history and civic pride.

I’m entering the contest–yes me, an abstract painter, painting a historical portrait. I like the challenge, and I want to see Norwich get its portrait back. Also, I hate art theft, where something that’s created for the public and brings beauty into the world is removed and hidden away. A stolen painting is too recognizable to be sold or displayed officially, and so it might sit in a closet somewhere. At best, it’s been installed in a secret viewing area, where the thief might privately enjoy it. If so, it’s a very selfish act, and a sad end to a work that was intended to publicly celebrate President Lincoln.

Here’s to catching the art thief.