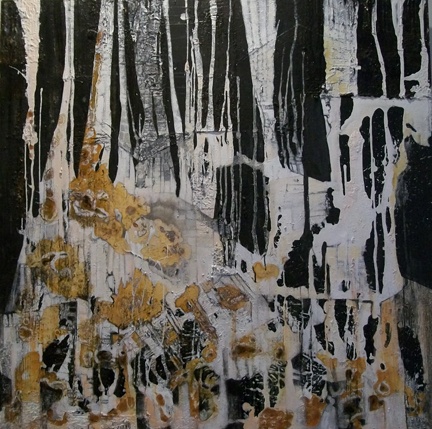 I’ve always been intrigued by the kind of artwork that artists collect. What do artists surround themselves with, outside of the studio? Is it the same or different from their own works? How do they go about choosing the pieces they live with on their walls, and do those pieces influence their own studio work?

Alison Wells is a Trinidadian artist who has lived and worked in New Bedford, Massachusetts since 2004. Her paintings have long dealt with an inherent duality. During grad school at UMass Dartmouth (where I was her classmate, studio neighbor, and friend) her work depicted the struggle of the individual in the city, and showed the city as a source of strength and energy, as well as a source of psychological and emotional turmoil. In this body of work, the abstraction of grids and architecture did battle with figurative silhouettes; the colder, straighter lines imposed themselves over organic shapes; and a limited palette of black, white and neutral tones subdued brighter colors, which made appearances as accents.

In time, the abstraction has yielded more frequently to figuration such as palm trees and silhouettes. A warm, colorful palette has emerged from the accent colors. The grid has broken down and yielded to organic shapes that seem to bend in a sea breeze, blowing in from her native Caribbean. And so the fascination with the double-life of the city has become an exploration of the double-life of an immigrant, living somewhere that is not her native home.

Looking at Alison’s art collection recently, we discussed some of the connections that emerged between her own work and the work she collects, and wondered what it all meant.

Interestingly enough, many pieces in her collection are black and white photos, line drawings, or paintings with a limited palette and a graphic line. This seems like a direct contrast with her current colorful, organic explorations.

“I’m drawn to the illustrative”, she admits. “The sharp lines, black and white, graphic elements. I have a side that likes that. Maybe I live vicariously through them now; I just love the fine line and the detail.”

Many of the works are arranged side by side, leading down a hallway to a window which looks out onto a downtown New Bedford street. The street is full of its own angles and vertical lines, its own blacks, whites, and grays. The corner where the art collection meets the street is anchored by one of Alison’s large “city” paintings, heavy with black lines and vertical drips.

“I have a side that likes that”. As she gestures to her own painting, it’s easy to see the similarities to her own earlier work. 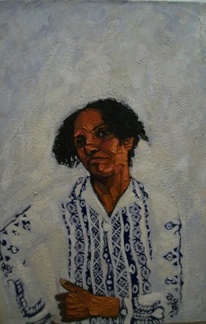 Alison points out her “closest view to New York City”, a black and white line drawing of New York City rooftops, acquired in a trade with a friend, Susan M. Funk.

As to how she acquired her collection, these trades–one artwork for another–are common. She owns a portrait of herself, painted by Scott Barry when they were both students at UMass Dartmouth; he gave it to her after she posed as his model, and she insisted that he take a painting of hers in return. Other pieces in her collection were part of special studio sales or other gatherings involving multiple artists.

Alison actively tries to collect local New England artists. One of the few colorful works is a pastel drawing by John Vliet of Pope Island in nearby Fairhaven, Massachusetts, and there is a handmade decorative mirror by local artist Brooke Syvertsen. 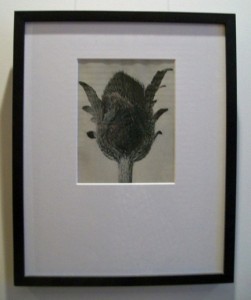 She proudly points to her favorite piece, Papaver Orientale (Oriental Poppy Flower Bud) by Karl Blossfeldt, a black and white photo purchased at the Red Cross Art Show which I organized in response to Hurricane Katrina in 2005 (I wrote an earlier blog post on donating artwork to charity that mentions this show).

Interestingly, this piece (or one very like it) also hung in Carrie Bradshaw’s apartment on Sex and the City. The black and white aesthetic meets the city once again, and a collector looks on.