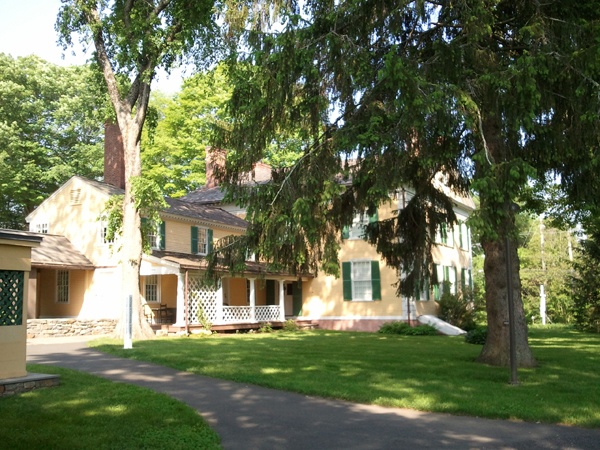 What a delightful afternoon at the Florence Griswold Museum in Old Lyme, CT.

I’ve been out of the CT loop for a while, but I was pleased to learn that the Hartford Steam Boiler Inspection and Insurance Company donated their excellent collection of 190 artworks to the Florence Griswold Museum in 2001. (I remember visiting the collection at the corporate offices in Hartford during college, and am glad to learn that they’ll be cared for and displayed in the museum context. While it was kind of fun to see art lining the corporate hallways, much of it was tucked away and unviewable in private offices, and the process of booking a viewing appointment to look at the collection was a bit tedious).

This donation created the need for a beautiful new wing, and expanded the holdings of the Florence Griswold Museum into CT and regional artists, not just former members of Miss Florence’s art colony.

A nice wing, and worth the trip, but the heart and soul of the Museum are the vestiges of the old artist colony that operated from 1899 to 1937. Plying one of the few trades available to respectable unmarried women, Florence Griswold opened her home as a boarding house, not expecting that it would come to gain a reputation as one of the preeminent art colonies in the country, and the home of American Impressionism. It’s now on the National Register of Historic Landmarks.

You can tour Miss Florence’s house, as it’s been restored to its 1910 glory. There are pluses and minuses for this choice of date: it allows for electricity and running water (which were installed that year) but Miss Florence’s harp sits by the window, silent and stringless, because it suffered an injury prior to 1910 and was never restrung. A pity, and it hints at the financial prospects of an unmarried woman who was always “this close” to poverty. Indeed, when she died in 1937, her belongings were put out for auction on the front lawn in order to pay some debts.

Although tours of the new wing and the grounds are self-guided, I was led through the house by two lovely docents, Kay and Charlotte, whose knowledge of that time period, the artwork, and the players involved, runs deep.

Areas on view are the VIP guestroom, where Woodrow Wilson frequently stayed (his wife was part of the colony), Miss Florence’s bedroom, the parlor, the main hallway which still functions as a gallery, and the dining room.

There, the table is set, and you can imagine that this was once a boisterous room. The character is shaped especially by the painted panels on the doors and walls around the room. This was part of a beautification-slash-thank-you project that the artists undertook, and shows the range of their personal styles. The spirit of friendly competition is also evident: artists challenged each other to make “companion” panels, one matching another in style and subject matter, for example. Or my favorite story, the one where the artists all decided to turn around a panel which was painted by an artist who didn’t pay his bill. The panel not only faces the wall and is hidden to this day, but to add insult to injury, another artist was allowed to paint the back of the original work. This proof of how strongly the artists felt toward Miss Florence, and their protective feelings for her, was touching.

In the parlor, I learned about a game called Wiggles, which sounds something like Exquisite Corpse, but maybe even more fun. One artist begins (as in Exquisite Corpse) and draws a few lines, then passes it to the next player/artist. Unlike Exquisite Corpse, though, each artist gets to see what came before and embellish it, eventually creating a truly collaborative drawing. Here is an example credited to William Chadwick; you can see the hands of the different artists by the different line weights and types of pens.

The rooms upstairs are now gallery spaces and show works by such colonists as William Chadwick and Childe Hassam.

William Chadwick was my favorite and there are some gorgeous works there by him: one with a red couch (which can be seen downstairs though it has been reupholstered in keeping with the 1910 dateline) and another of a woman with teal wallpaper behind her head. He had a great, dramatic color sense.

When you walk around the grounds and riverfront, make sure to swing over to Chadwick’s studio, a little building on the grounds. While I was in there, I had dreams of my own rustic little [future] space, with a nice study easel, a long table for mixing paint, a couch for napping or socializing, a table for framing, a desk. Not fancy, but workable. That’s the life! Someday.

This was a great museum and all of the fun-loving videos and photos of the artists brought back memories of my residency at The Vermont Studio Center. It’s great that places like Miss Florence’s exist in the world.