The Museum of Motherhood

As I was walking down the street the other day, I saw a large banner that proclaimed a new museum opening, right in my neighborhood. This was news, and how could I not have known about it, just three blocks from my place? It’s called the Museum of Motherhood. I wandered over and poked my head in, and was treated to a personal tour of the new museum by its Director and Founder, Joy Rose.

What fun! It’s not just for moms or their kids. The approach is deliberately multi-pronged and multi-leveled. Exhibits included a pictorial one on the history of childbirth, illustrating, for example, how pregnant women in the Middle Ages were given last rites by the Catholic Church because of the likelihood of death. Several art exhibitions dealt with different views of motherhood. In one, photographs and financial notes contrast the labor a mother performs at home (caring for the kids, gardening in the yard) with the labor of a professional performing the same duties (daycare provider, landscaper); the only difference is that one is paid and the other is not. Another exhibition takes a more lighthearted, Pop Art look at the domestic side of caring for kids, with garments like aprons made of laminated cereal boxes. This art was created by Joy, who also confided that she founded the so-called “Mom Rock” band “Housewives on Prozac”. I recall reading about them in Entertainment Weekly a few years ago, and my sister was a fan too. Street cred!

Other exhibits feature a pregnancy vest which can be donned to simulate the weight and feel of being pregnant (boy, it was heavy); a chalkboard wall for recording thoughts, grievances, etc; and more artwork. 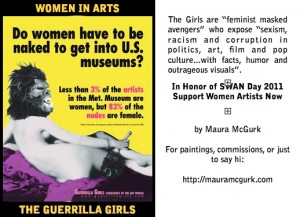 Joy also gave me a sneak peek at upcoming events — the Guerrilla Girls will be performing! She also was very specific that there are different kinds of mothering and that we all have some experience with it, whether we have gone through childbirth or not — mothering a project, a pet, a family member. The Museum’s premise is that there is a different reality to motherhood than the syrupy, Hallmark version which is what gets presented and swallowed most often.

Her comments on mothering a creative endeavor echoed an ongoing discussion in grad school, about artists considering their artworks to be their children…you bring them into the world, sometimes at great personal labor, you care for them, and it can be difficult to see them leave. There’s a very powerful mythology there for many artists.

This museum sounds ambitious and fun, and scholarly too. At the moment, it’s a pop-up, set for four months, but if it does well, it may stick around for another two years or more. The art changes frequently, and lots of programs and readings and concerts are being planned for the near future, so it’s worth a look.