The Noyes Museum of Art

The Noyes Museum of Art in Oceanville, New Jersey is an unexpected treat, and reminds me of The DeCordova Museum in Lincoln, Massachusetts. They are both small museums with nice programming, located alongside a pond, in a small town, off the beaten path.

The Noyes is tucked away, down a small, twisting lane lined with trees. When you finally come upon it, you’ll find the architecture to be unexpectedly airy and rustic.

We visited near closing time, and found ourselves to be the only patrons in the museum. Maybe it was because of this, or maybe because we bonded with the staff over some plesantries, or maybe because they are really that accessible, but two of the employees offered us access into a gallery which was closed due to installation of a new exhibit. Though the installation process was nearly complete, and most works were hanging on the walls, there was evidence of what goes into hanging a show: tape, bubble wrap, and boxes laying around; hammers and levels stacked near the doorway; notes, paperwork, and wall texts momentarily scattered about. We usually think of a museum exhibit as a finished piece, and rarely get to see the work that happens behind the scenes. This kind of access is unprecedented in my experience and another example of how charming and special this museum is, but it was also especially relevant for the show in question: Mel Leipzig: Life.

Leipzig clearly has a special place in his heart for artists. Many of his paintings depict artists in their studios, and capture their personalities through the studio layout, as well as how they present themselves to the world amongst their work. We walked around the gallery, surrounded by images of artists in their studios, picking our way among the paintings leaned against the gallery wall, seeing evidence of the many hands which worked to make this show possible: the artists (and actors) depicted on the canvases, Leipzig himself who painted them, the picture framers who created the finished presentation of the canvas, the person (perhaps the artist himself) who wrapped the framed paintings in bubble wrap and brown paper, the museum’s art handlers and preparators who measured the walls and hung the show with the tools we could see around us–the entire working process all came full circle in the gallery, and this was an added element to the show. I wish everyone could have seen the show in this way, as it made the viewer feel closer to the art and the creative process.

Leipzig works in a mostly hyper-realist style, with an often distorted perspective that resembles a fish-eye lens. Every detail is equally important in these worlds, and he has a feel for texture and surfaces, such as graffitied and postered dorm walls, tattooed skin, and wood flooring. These subjects are explored quite richly in the worlds of artists of all ages, and young adults such as college students. Paintings like Joshua’s Room or Four Painting Students allow him to dig in and show everything contained within those rooms from posters on the ceiling, to artwork on easels, to logos or wrinkles on clothing. Leipzig seems to lose interest when painting infants and young children, however; the paint handling feels slapdash and incomplete compared to the rest of the painting, and the anatomy is off (heads are too large, bodies misshapen). As a viewer, I would prefer to see him concentrate on the subjects that genuinely hold his, and our, interest. But I enjoyed this show very much.

In another gallery was a group show called Sueños: Contemporary Latin American Art. Especially notable was Alfonso Corpus who created a moving installation called La Cantuta, which references the kidnapping and “disappearing” of a university professor and students in Peru in 1992. This incident was prominently cited as an example of human rights abuses by the government under the reign of Alberto Fujimori. The back end of the gallery was devoted to this installation, with black crepe paper roses carpeting the floor, and black desks placed together. and Alex Queral who carves bas-relief portraits from phone books. 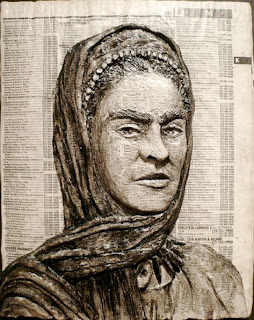 Next time you’re in south Jersey, swing by The Noyes Museum; it’s well worth it.