The Pop-Up Museum of Queer History 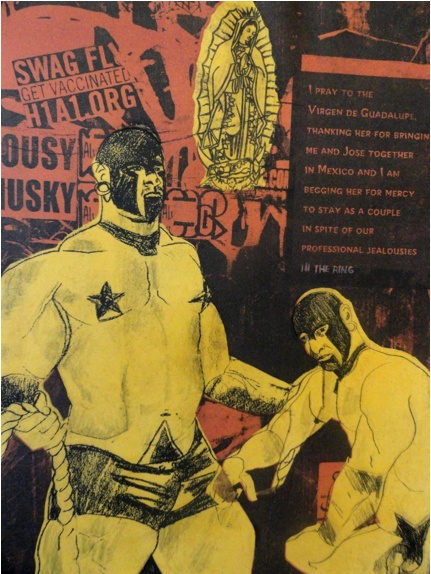 I’m still thinking about the recent show at Leslie Lohman Gay Art Foundation which by the way, was just transformed into the Leslie Lohman Museum of Gay and Lesbian Art –congratulations to them!

The exhibition was The Pop-Up Museum of Queer History, in its second incarnation. Earlier in 2011, it popped up in a Brooklyn location, and it has plans to go to Bloomington, Indiana in October.

So what is it?

The Pop-Up Museum of Queer History is a grassroots organization that transforms spaces into temporary installations celebrating the rich, long, and largely unknown histories of lesbian, gay, bisexual, and transgender people. We believe that our community – and especially our youth – deserve to know our history. If you don’t know you have a past, how can you believe you have a future?

About 30 artists were represented in the show; maybe that was a few too many for the space, and the quality was up and down. But as the nursery rhyme goes, the ones that were good were very, very good.

Among them were the contemporary ex-votos which use the Mexican tradition of offering thanks to a saint. Carmine Santaniello had a couple of earnestly humorous prints such as Professional Jealousies, which features two beefy, masked Mexican wrestlers. The text within the print says:

I pray to the Virgen de Guadalupe, thanking her for bringing me and Jose together in Mexico and I am begging her for mercy to stay as a couple in spite of our professional jealousies in the ring.

Or another by Carmine, which says: “I bring my everlasting love to my husband’s grave on the Day of the Dead-Festival of the Skulls, the way he liked me — naked and strong.”

These pieces are typical of the blend of private and public, domestic and political that make up gay art. There is a special vulnerability to same-sex declarations of love, because one doesn’t know the reception they will receive by the greater public. Will being out lead to acceptance? A hate crime? An uneasy truce? These very private feelings become public and open for judgment, discussion, and political posturing.

The ex-votos take a confident stance at blending the public and private; they are out and thankful; there is nothing to hide from even their saints.

Sip-In by Tim McMath was another that took the direct approach: it was a diorama that recreated the day in 1966 that a group of gays entered a bar in New York City. At that time, it was illegal to serve alcohol to gays; one restaurant in the East Village sported a sign that stated “If you are gay, please go away.” The men could have stayed in the closet, drank their drinks undercover, and left, but they challenged the law by announcing: “We are homosexuals. We are orderly, and intend to remain orderly, and we are asking for service.” This “sip-in” led to the legal challenge in court that eventually gave gays the right to peacefully assemble.

Morgan Hart’s Seeing Femme installation consisted of memory boxes which were glittered up and collaged with book covers, photos, magnets and pins featuring fictional and real women from all time periods and walks of life: Jo March, the Virgin Mary, Jean Harlow, Nancy Drew. These women all served as answers to the question: “Who are your femme icons and influences?” There was a suggestion box for viewers to add their own (I offered up Mary Tyler Moore).

A movie called Paradise Lost, which interviewed Trinidadian LGBT folks about their status and lives in a society where being gay is still illegal, was especially poignant, as was an installation from Sasha Wortzel, which memorialized her longtime partner who had died.

I walked away with a list of books to read (Odd Girls and Twilight Lovers, Tales of the Lavender Menace) and armed with new knowledge: