The Puzzle Pieces Were a Hit! 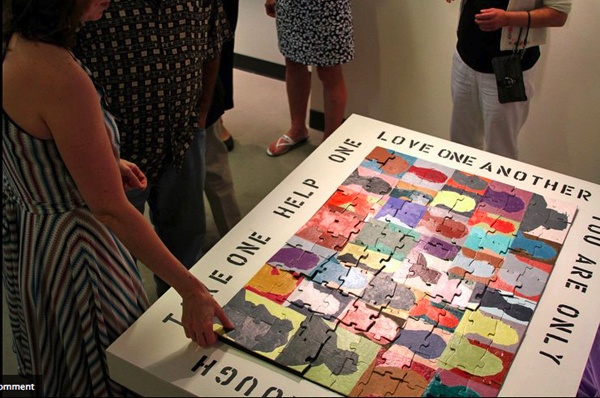 If you read my earlier post which explained the story behind the puzzle pieces, you know that I considered this an experimental piece…after all, I don’t usually make interactive pieces or installations.

The idea of a giant puzzle was born. 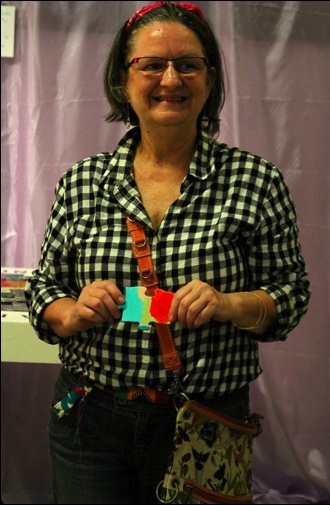 The puzzle was set up on a table, so that folks could gather around, and this made the piece more accessible and approachable. On a literal level, people could lean over it. On a psychological level, there was something friendly and maybe less threatening about having the artwork placed this way: it didn’t seem like a “difficult” abstract piece in a gallery; it seemed like a game table at home. People were encouraged to touch it and choose their own piece. The fact that there was a “hidden” painting underneath the puzzle pieces that would be revealed only by buying pieces also spawned some wild guesses and healthy competition about whose guess was right.

The fact that each piece is priced at just $15 also added to the fun. Everyone wanted to do something to stand up to gay bullying, and the price point made it possible for them to act on that wish. Not everyone could spring for a larger painting, nor does everyone have the wall space for that at home…but a magnet for their fridge or their filing cabinet at work…that was possible.

I was happy to hear people comparing pieces, asking others for their thoughts on which one was prettiest or most interesting. But they also shared their stories as they gathered around the puzzle table: people talking about being bullied themselves, about how they felt when they heard about the young teenagers who committed suicide. Although I deliberately spaced the teenagers’ silhouettes so that they were broken up over the borders of the puzzle pieces–to form a small abstract painting on each piece, but also to avoid the psychological weight of asking someone to place a portrait of dead child on their refrigerator–one woman asked for a piece with an entire silhouette. She said she wanted to remember these kids, wanted to be reminded of her commitment to take a stand against gay bullying, wanted to help.

That was the whole idea.