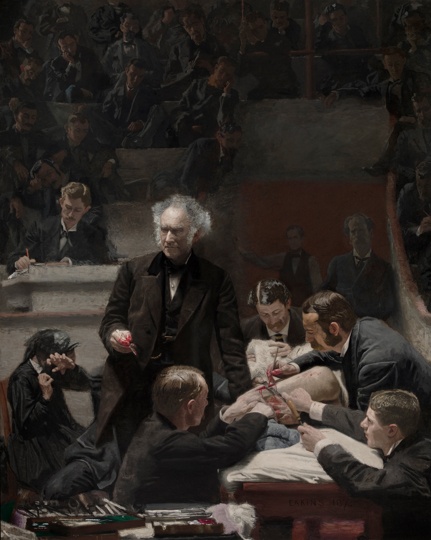 The Gross Clinic, by Thomas Eakins, 1875

February 13, 1886
Thomas Eakins is forced to resign from the Philadelphia Academy of Art after controversy over the use of male models in a coed art class.

The story is more complicated than this may sound, and the resignation was the consequence of a series of questionable behaviors on Eakins’ part, coupled with the ambition of his peers.

Eakins rose from a volunteer teacher to director of the Philadelphia Academy of the Fine Arts in just six years. All along, his beliefs and teaching methods were controversial. He believed that women should have the same responsibilities and possibilities in the classroom and professional worlds as their male peers. As a strong proponent of Realism, his students drew from life rather than plaster casts, and they jumped quickly into painting and color; both of these methods bucked the academic trends of the day. Eakins encouraged the use of photography, but did not allow prize competitions. Anatomical studies and specimen dissections were necessary for all artists. His personal teaching style was fairly hands-off; he felt that leading by example but getting out of the way was the best a teacher could do for his students. All of these teaching methods were out of line with the academic trends in the 1880s, although the course of study was rigorous, and considered the most advanced in the world.

Although Eakins believed in equal opportunities for the men and women in his classes, a nod to the propriety of the day was to require that the students be separated by sex when engaged in life drawing. Although the female students were allowed to draw and paint male models, theirs were dressed in loincloths; the models in the next room with the male students were nude.

This is where Eakins got himself into some trouble. A female student inquired about the movement of the pelvis, which she couldn’t see under the loincloth. Incredibly, Eakins invited her to his studio, where he personally undressed and answered her question, using himself as a model. I don’t know if he was genuinely naive, or if something else was going on, but incidents of this kind added up over time and caused tension with the board of directors. It didn’t help his case that other teachers at the school wanted his job.

The last straw for the Academy was removing the loincloth of a male model when female students were present, and he was forced to submit his resignation on February 13, 1886.

This public humiliation embarrassed him for the rest of his life. His in-laws did not support him, though his wife did, as did many of his students, who left the Academy in protest. They formed the Art Students’ League of Philadelphia and invited him to teach there. He did, as well as at several other schools in the Philadelphia, New York and Washington, DC region. He tempted fate again by using a fully nude male model in front of his female students, and was dismissed by the Drexel Institute in 1895. He was out of teaching altogether by 1898.

Fun Fact: There is a movie about this scandal which I saw in college (it’s not the one that was shown on PBS in 2002). Mr. Mooney, Lucille Ball’s old boss on The Lucy Show, plays one of the trustees who fires Eakins, as I recall.